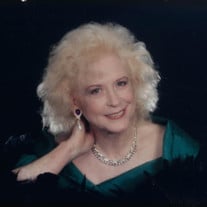 Doris was born on July 23, 1923 in Roundup, Montana Harry C, and Rosie E. (Stredwick) Palmer. She the youngest of five children, Calvin, Wilfred, Florence, Joyce then Doris. Brothers Calvin and Wilfred were killed in action at Pearl Harbor when their ship, the USS Oklahoma was hit with at least one torpedo. They were repatriated at Sunset Lane Memorial Park on Friday, August 9, 2019 at 2:00 pm on a sunshiny day with all the fanfare deserving of their sacrifice. Doris may not have been fully aware of what was going on, but aware enough to know it was a special for her and her family. It was her older brother Calvin that introduced her to a sailor from the Oklahoma, Charles Burns, as her future husband. Not too much later, that would come to pass as they were eventually married. They had 3 children together: Stevie, Charles, and Helene. Stevie was born with some very challenging birth defects that at an early age with much remorse the state of California removed him from the home to live in a state institution. Stevie lived there the remainder of his life until age 70 where he recently passed away. He will be buried with her today. During the war Charlie and Doris transferred several times where she would find employment often as an office assistance of sorts. When her children came along, she become a full time Mom. In the 1980’s over one of the lunches that Doris and Helene loved to have together, Doris and Helene decided they would try starting a catering business called BJ Catering (Burns Jensen Catering). The business quickly became very popular doing all kinds of parties, weddings, and fundraisers for the community and beyond because she was meticulous and profoundly good at what she did. She was probably one of the hardest working women you ever met. She could out work any of us when she was in her 70’s. Doris and the family enjoyed working together helping the community with fundraisers for the republican party and church. Helene’s fondest trip was when they spend the entire summer in New England during the Bicentennial. It was her job to decide what to do each day. All they had was a map. No GPS then. The challenge was to find routes that did not have tolls so that meant traveling on the country roads and often getting lost. LOL! Let’s just say they never traveled the same road twice. Doris was very political! In fact, our entire extended family with her Sisters and their husbands were very politically involved, both republican and democrat, which led to some very passionate conversations at the dinner table. Doris’s passion for politics lead to her volunteering a great deal for the Republican Women in the 70’s where she launched many campaigns helping her preferred candidates get elected such as Ellen Craswell, Jan Angle, Slate Gordon, and Bob Oke, just to name a few, having huge fundraisers in her house etc., where Helene was always the entertainment at these events twirling her baton or dancing for the guests. When she was not trying to get her favorite candidate elected, she also enjoyed being a member of a pinochle club with her sister Florence. EVERY HOLIDAY was celebrated with fancy meals and every spring meant planting lots and lots of flowers. She had a green thumb and could make anything grow. She also loved to sew and when the embroidery machines came out, she had that constantly going where she was putting embroidery on any kind of clothing she could find! She also enjoyed making jewelry. Everything that she did, she did in a big way. Some of Doris’s favorite flowers consisted of carnations, roses, calla lilies and gladiolus. Some of her favorite colors were pink, yellow & green. Helene has as one of her memories of calla lilies: when she was a little girl, she thought the middle of the calla lily’s looked like mini corn on the cob, so she would pick them out and put them on a plate and pretend to feed them to her dollies. Doris was always saying to stop picking the middles out of her flowers. Doris was very outgoing with a big personality, with her own sense of style, with big hair, and loved to wear pearls, crystals, diamonds, and sparkly shoes. She was not a person who blended in the room but instead was the person who everyone ran up to, to say hello. Doris spoke her mind and did not hesitate to let you know what her opinion was which people really respected her for. Her strong confident personality is what made Helene the strong person she is today. Doris’s generosity was unprecedented. If she sensed you needed help with anything, she would literally give her clothes off of her back if she thought you needed it. A favorite time for Charles and Helene was shopping and going out to lunch together as it was our time. Doris would always treat them to fancy lunches at places where they would have white table clothes on the tables. She loved shrimp or crab salads. There is where they talked about all kinds of things and solved all the world problems. Helene considered her mom to be her best friend. Doris passed away peacefully at Stafford at Ridgemont in Port Orchard on May first. She is survived by her son Charles Burns of South Carolina, daughter Helene Jensen and her husband Carl of Port Orchard; two granddaughters, Rachelle Payne and her husband Cory, Carlene Harmon and her husband Zach. She also has two great granddaughters, Addilyn, and Elise. Doris also had two schnauzers that she loved dearly! Snyder, who tragically got hit by a car, so then that brought along, JoHan who was with her for many years. DUE TO COVID CONCERNS, attendance at services are by invitation only. Live stream viewing will be available on this site.

The family of Doris P. Burns Houk created this Life Tributes page to make it easy to share your memories.