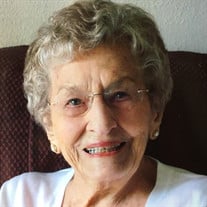 Doris Irene (Hamlow) Yeadon, 99, passed away July 14, 2018, at home with family in Bremerton, Washington. She was born on April 25, 1919, in Great Falls, Montana and lived for many years in Bremerton. She was a minister’s wife, mother, homemaker, and friend to many. She married Gerald “Jerry” Yeadon, Sr. in Seattle on April 4, 1941. He preceded her in death in 1997. Doris was a 1939 graduate of Northwest Bible Institute now known as Northwest University, Kirkland, Washington. Doris and Jerry founded Bremerton Revival Center in 1950 and spent most of their careers centered on their ministry in downtown Bremerton, and Mexico where they served as missionaries. She was an active member of Hillcrest Assembly of God in Bremerton. Doris knitted slipper socks and made jams, pies, and jellies for family and friends. She enjoyed reciting and writing poetry. She stayed knowledgeable on current events, politics, and was an avid reader who enjoyed visits from family and friends. She loved all people and loved to serve the Lord. Doris remains alive in the hearts of her family. She is survived by her six children, Gerald “Jerry” Jr. of Chula Vista CA, Keith of Seattle WA, Joyce Matsumoto of Gig Harbor WA, Nancy Vaux of Maui HI, Elaine Valencia of Bremerton WA, and Bruce of North Bonneville WA. She has thirteen grandchildren and numerous great-grandchildren and great-great-grandchildren. Counting spouses, she has over 60 descendants. Her sister, Patricia Hamlow Anderson, lives in Log Lane Village, Colorado. A gathering of family and friends will take place at 1 PM on Tuesday, August 7th at Willamette National Cemetery in Portland, Oregon.

Doris Irene (Hamlow) Yeadon, 99, passed away July 14, 2018, at home with family in Bremerton, Washington. She was born on April 25, 1919, in Great Falls, Montana and lived for many years in Bremerton. She was a minister&#8217;s wife, mother,... View Obituary & Service Information

The family of Doris Yeadon created this Life Tributes page to make it easy to share your memories.