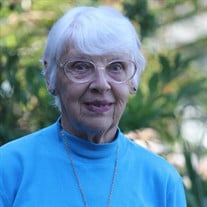 Dorothy Faye Schmidt was born August 15, 1924 to David and Martha (Belle) Schmidt in Los Angeles California, where her father was pastor of a new church, South Los Angeles Community Church (SLACC). The Schmidt family grew as Dorothy had three younger siblings, sisters Marion and Rosalle and Brother Melvin. The family grew up with her grandparents George and Phebe Crain living with them. As she grew up being a Pastors Kid, the church also grew with the family, so did their active ministries with the congregation. During this time in 1935 Dorothy accepted Christ as her personal Savior. Dad and Mom enrolled her in Cutler academy and finished her high school work there. On graduation she attended Bible institute of Los Angeles Known as BIOLA to further her desire in preparing for Christian ministry as her parents had done. She met another attendee named Arnold Wall who was part of the collage quartet touring the US. Then in 1944 they became engaged and eleven months later she became Mrs. Dorothy F. Wall on Sept 24, 1945 at South Los Angeles Community Church. They first lived in Spokane Washington, where Arnold’s post grad studies at Whitworth College with Dr. Hubbard. There she found out the kind of tease Arnold was, when he brought to the table a hammer, screw driver and chisel for Dorothy’s first batch of biscuits. After graduating in 1947, they moved back to Los Angeles while attending SLACC She gave birth to their first son Eldon. After a year they were called to Channing Michigan to serve in a small church while waiting for approval to go to China with the China Mennonite Mission, Honan Province. However the door closed when the Chinese Communist takeover happened in 1948. Dorothy became a pastor’s wife when Arnold was ordained by the EMB in July in Dallas Oregon. In October 1949 a second son Bruce was born and they became supporters of his special needs. They moved to Mountain Lake, Minnesota to work as the principle at the Christian school in town for 3 years. Where Dorothy was introduced to farm life and attending the EMB church there in town. Dorothy’s brother Melvin was killed by lighting in 1950 at the age of 16. In 1952, they moved back to Los Angeles where Arnold worked an assistant pastor at SLACC. Larry Arnold Wall became last member of the Wall family in September 1954 . Then in 1955 Dr. David Schmidt retired from SLACC to become the director of Southwest Church extension of the IFCA and handed the Church over to Arnold. In 1961-1963 Dorothy helped Arnold to complete his Masters degree in religious education in Pasadena, California. During a vacation that summer on a Sunday in July, Arnold was asked to speak at a church in Bremerton while they were looking for a pastor. A month later they were call to Navy Yard City Bible church. During this time Dorothy took on many roles that she had been training for in Christian service ministries. Ladies bible studies, were fruitful, in so many women’s lives that we are still seeing the impact, even today, at Faith Community bible church. In 1976, after Arnold had heart surgery, they moved to Salem Oregon to be close to Arnold family. They both took on the role of Missionary at large for NICE, working with churches in Washington, Oregon, northern California and Nevada. The teamwork during this time healed hurting churches and was blessed by God in so many lives. Arnold passed on to Glory in 1987 and Dorothy found a new role when she met Herman Simpson. When they were married in 1989, Dorothy sat in Herman’s lap holding on to him lovingly and he drove his wheelchair back down the isle during the recessional. She inherited a large second family and became a second loving mother, grandmother, great grandmother to this family. She spent many years helping Herman with his physical needs while traveling around to help the extended Simpson family. When Herman went Home to glory in 2005, she tried to keep up the house but after a couple of years she decided to sell and move back up to Bremerton, Washing ton. In January 2009, she moved to an apartment in east Bremerton living mostly independently for 11 years, as a faithful prayer warier for his Glory, enjoying the fellowship at FCBC while encouraging other in the church. Her favorite past time, was choosing fresh produce, than cooking her own meals. She loved that. She gave few complaints about her physical challenges, and after the heart attack on September 17 she felt God was calling her home. On the night of October 19th she thanked God for her life and to take care of all of her children. The following Sunday was call to meet her Savior and lord on October 25, 2020. She was preceded in death by her mother, father, sisters and brother. She leaves from the Wall family: Eldon and Jean Wall of Bremerton Washington, Bruce and Anne Wall of McMinnville Oregon, Larry and Gloria Wall of Mountain View California , 8 grand kids, 9 great grandchildren and two foster great grandchildren. She leaves from the Simpson family: Gloria and Karl Bullard of Otis Oregon, Nancy Stambaugh of Astoria Oregon, David Simpson of Salem Oregon, Linn McMillan of vail Arizona, 17 grandchildren, 46 great grandchildren, 17 great great grandchildren, 1 GGG grandchild. Her Joy in life was her Lord, her family and serving others. We will surly miss the many prayers she prayed for all of us over the years.

The family of Dorothy Faye Simpson (Schmidt) created this Life Tributes page to make it easy to share your memories.