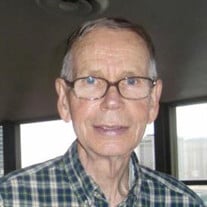 Douglas Henry Wakefield – Nov 10, 1934 – Nov 9, 2018 Douglas Henry Wakefield was born on November 10, 1934 at home in Monroe MI. His parents were Henry Wakefield and Ruth Baines Wakefield. His father taught printing at Monroe High School for 36 years – no windows only skylights. They spent the month of August usually in Petoskey, MI where both parents were born and relatives lived. Doug has one sister, Elaine Wakefield McCalla born February 14, 1938. She became a teacher, like Doug and their father. Doug and Sandy (Sandra Hansen) met through his sister at her wedding in August 1960. She arranged for Doug to take Sandy home from Monroe, MI to Muskegon, MI They hit it off and were married the following June. Doug taught junior high and high school for 36 years. Most of those years he taught in Taylor School System, a suburb of Detroit. He was a high school librarian for the last 20 years. They have two children, Steve and Cindy. Doug was elected to the Board of Trustees for Oakland Community College in 1984 while Steve was a student there. In order to be on the ballot, he gathered signatures at the local grocery store and was shocked when he won. He became known as the Trustee that ran a low-key campaign. It became a big part of his life and he was able to make important contributions. He served two terms from 1984-1996. Doug did tutoring in the inner-city of Detroit with Detroit Youth for Christ ministry every Monday afternoon for several years. He enjoyed that very much. Through one of the Trustees at OCC, Doug learned about mediation in the court system of Southfield, where they lived. He took the class provided and was involved in that for 3-4 years which he found very fulfilling. They moved to Hansville, WA in June 1996. Later Doug found a lot on Kitsap Lake in Bremerton. They had their dream house built there and enjoyed it for four years. Then their children starting having children so they moved to Seattle. They have enjoyed each move and appreciated being closer to their children and grandchildren. They moved to Cristwood Park in January 2014. Doug had dementia as his father did. He moved to a memory care facility in September 2015. He had wonderful care there. Doug is survived by his wife, Sandra and two children, Steve and Cindy. He is also survived by his sister, Elaine (and Bud) McCalla,.four grandchildren (Hudson, Currie, Nadia and Max) and many nieces and nephews. Donations may be made to: Alzheimer’s Association PO Box 96011 Washington, DC 20090-6011

The family of Douglas Henry Wakefield created this Life Tributes page to make it easy to share your memories.