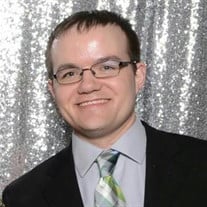 The Story of my Life Words that describe Dustin: Empathetic, loving, sensitive, considerate, realizing he loved being a certified medical assistant, learning all he could and finally deciding, he would be a great nurse – to which his Mother heartily and ecstatically agreed Favorite stories: - Dustin’s delivery probably gave his young doctor PTSD when that doctor decided not to put on glasses/face shield/waterproof gown while examining Dustin’s mother during a particularly strong contraction. Dustin’s first practical joke. - Ordering fireworks for the 4th of July-- he loved working for Pyro Dave… - The first time he ate paella with shelled creatures – it was dark in the flamenco hall. He was traumatized when he bit into a small squid, then a shell and realized just what he was eating. - Living among fireworks, New Year’s Eve in Rota, Spain. They would shoot the fireworks from the roofs of buildings surrounding the square. Beautiful and amazing doesn’t describe the experience. Dustin was everywhere among the sparkling lights. - Wearing Unit, his cat, as a hat around the house. No one has ever looked as disgusted as that cat. - Traveling to Germany at Christmas and exploring churches and historical buildings with his Mom and her coworker and friend, Lori. Lori loved taking pictures and her constant exclamations of “oh, isn’t this the most precious thing” just about did him in. Some significant accomplishments: Figuring out how to raise that Right Eyebrow at an early age. Graduated high school in 2006 Attended Everest College to become a medical assistant Selected as an “Igniter” Ambassador to serve as a role model and mentor for other students Graduating as a medical assistant and achieving certification Finding employment immediately following college at the Seattle Vascular Center Realizing that he loved working with patients and staff in the Urology Clinic Occupation: Certified Medical Assistant with The Doctor’s Clinic Urgent Care in Poulsbo, WA Personal activities: Work, sleep, caring for and messing around with his cats, baking and trying “interesting recipes,” getting slurpees at 7-Eleven, working/enjoying wood type (3D?) puzzles, driving his car, washing his car, going to Sonic : Vanilla Custard Concrete , made with Heath Toffee Pieces, Blue coconut slush, with or without ice cream…, obviously to the dismay of his doctor since his diet was atrocious, but at every appointment, she tried to change it, writing “less sugar, more vegetables – potatoes and corn do not count,” watching movies, playing video games, playing Dungeons and Dragons (?) after work with friends from work, talking with friends on his phone or online, listening to music, more sleep, making his sandwich for work, carefully placing it on a plate and taking a ginormis box of cling wrap to cover both sandwich and plate. We always thought that was the weirdest thing… Favorite experiences: Road trip with 3 friends – visiting the Grand Canyon, Crater Lake in Oregon and other places on the way Trips to Canada to visit with a friend, Winona, and helping her move Playing football overseas – of course he was the smallest guy out there Visiting and enjoying other countries Seeing old castles and cathedrals up close Driving his car on a rambling trip from the West Coast to visit gaming friends across the country Visiting Kat in New Jersey, getting food from Kat’s Mom who thought he was too skinny Exposing his Father to Sonic’s pretzel dogs and chocolate gooey concoctions from everywhere Being with Rachel/ not being with Rachel – it was complicated, he said Favorite places to spend time: In his room sleeping, playing online games and tormenting and being tormented by his 3 cats Working as a Certified Medical Assistant anywhere except Seattle Vascular Enjoying the discovery of finding, eating and sharing “delicious” food from everywhere, which was appalling to both Doc and Mom Favorite Movies: Lost in Translation The Aquatic Life with Steve Zissou Several anime as well Favorite Flower: Any type that he felt would make his Mother happy – Valentine’s, Mother’s, Birthday, Christmas or just because – no child was ever so thoughtful Favorite Sayings: Snap! (when someone topped him in a word battle) “What did you bring me?” Others, too numerous to accounting Pets: Unit, Cleo and Ozzie, his cat trio (all from Rota Spain) and now 15 years old Gunnar – a rescue German shepherd, who we lost way too soon and just 3 weeks before Dustin Logan – a loving, playful Boxer we adopted to keep Gunnar from getting too fat, which wasn’t possible since Gunnar was a “foodie” like Dustin.

The Story of my Life Words that describe Dustin: Empathetic, loving, sensitive, considerate, realizing he loved being a certified medical assistant, learning all he could and finally... View Obituary & Service Information

The family of Dustin Charles Martinelli created this Life Tributes page to make it easy to share your memories.

The Story of my Life