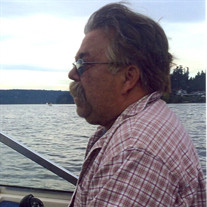 Eddie Dwight Siegfried, AKA Old Man, was born in Seattle Washington May 04, 1947. He passed away at home suddenly on the early morning of February 08, 2017. Ed was preceded in death by his parents, Edward H. Siegfried and Virginia P. Siegfried. Survived by his Wife, Dolly V. Siegfried, his sister Joanna, his daughters Shawna and Kirsten and sons Jason and Zachary, step daughters Nichole, Linda, Tammy, Samantha and Lisa, along with many grandchildren, great grandchildren, nieces and nephews. Born in Seattle, he graduated from Rainier Senior High and entered the Navy. After leaving the military, he worked for a short time at American Can Company and Boeing Field until he found his passion as an auto mechanic. From there in his civilian life he worked many years as a mechanic, starting with one of his favorite jobs job for Volkswagen, a job he talked about often. Later, he worked at Naval Base Keyport where he was a Mail Carrier. There, he was able to meet and talk to random people daily which was one of his favorite pastimes. In 1998 he went back to school for his CDL license and drove long haul trucks for some time, but auto mechanics remained his hobby. He often brought one of his children along when driving truck when able. After retirement, he spent 10 years landscaping on Bainbridge Island. He loved that and in it, found a new hobby. In the last three years he worked at Days Inn of Port Orchard as MacGyver, devoted to and completing any task placed in front of him! He loved to work in his garage, tinkering. Anything to working on cars, small engine repair to welding, he was a jack of all trades. He loved the outdoors, he was the Captain of the sea, excelling at fishing, crabbing, boating and any other task on the water, all with a beer in his hand. That “Old Man”, known for his growl and grumpy exterior, was a softy inside where it mattered; always there for his family—he loved them all and would do anything in the world for them. He will, live in our hearts and memories forever, and be missed so much. A celebration of his life will be held at First Baptist church of Port Orchard on February 25, 2017 at 1 pm. Anyone one who would like to attended are welcome to join us. If you would like to make any donations, please give it to the church holding this event (First Baptist church port orchard). If you would like to contact the family for any reason, please call Jason Siegfried @ 3602657816.

Eddie Dwight Siegfried, AKA Old Man, was born in Seattle Washington May 04, 1947. He passed away at home suddenly on the early morning of February 08, 2017. Ed was preceded in death by his parents, Edward H. Siegfried and Virginia P. Siegfried.... View Obituary & Service Information

The family of Eddie Dwight Siegfried created this Life Tributes page to make it easy to share your memories.