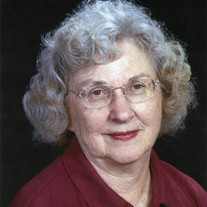 Edith Lucille (Rimple) McKelvy, 82, was born on February 7, 1937 in Bremerton, WA, and died peacefully in Silverdale, WA on February 10, 2019, surrounded by her family. She was pre-deceased by her parents and is survived by her husband James (“Jim”) McKelvy, brother Ernest (“Carl”) Rimple Jr, and many nieces and nephews. A lifelong Kitsap-area resident, “Edie” was the first of two children born to Ernest Rimple Sr and Olga (Brade) Rimple, and grew up on a 10-acre farm in Port Orchard that had been homesteaded by her father and grandfather. Her father worked for many years at the Naval Shipyard in Bremerton, while her mother was a homemaker and maintained the farm with the help of the children, including managing a small herd of milking cows and chickens, and growing fruits and vegetables. The farm is now the site of Sidney Glen Elementary School, while much of the blacksmithing and other equipment was donated to the Kitsap County Historical Society & Museum and can be seen annually in the History Museum Building at the Kitsap Fair. Edie graduated from South Kitsap High School in 1954, joining the workforce at Boeing and commuting to Seattle by ferry daily. She also enrolled in evening classes at the University of Washington and Olympic College, graduating with an Associate Degree in 1961. Eventually she joined the civilian staff at the Naval Undersea Warfare Engineering Station (NUWES) at Keyport, WA, as a Budget Analyst, where she continued to work until her retirement in 1993. Edie met Jim McKelvy in 1958 at a local dance, and they were married in 1959 in Port Orchard. Jim had served in the Air Force and was working at NUWES, which allowed them to commute together. They designed and built a house in Silverdale in 1964. Edie enjoyed traveling and made a solo sightseeing trip to Alaska and the Yukon in 1958. After marrying, she and her husband made many trips, including visits to the South Pacific islands, Mexico, Spain, Portugal, Turkey, Hawaii, the United Kingdom, North Africa, and Greece. During summers, they waterskied and traveled throughout the Puget Sound region and the Strait of Juan de Fuca in their cabin cruiser. Edie had a strong interest in family history and genealogy, tracing her roots back many generations and making connections with distant family across the world. She visited her cousins in Canada a number of times and remained close to them throughout her life. She was active in the local genealogical society and, with the rise of computer-assisted searches in the 1990’s, became very adept at online research, helping others to uncover their family histories. Her interest in computers continued to grow and she became a member of Kitsap Computing Seniors, including serving as President of the club from 2006-2009. Edie loved flowers and gardening, becoming a certified Master Gardener and helping with local Master Gardener training and events. She and her husband were also active members of the Silverdale Lutheran Church, having donated their time and money for many years. In late 2016, Edie was diagnosed with ovarian cancer. With medical treatment, the cancer moved into remission in 2017, but returned aggressively in late 2018 and was ultimately untreatable. Edie will be buried at Sunset Lane Cemetery in Port Orchard on Monday, February 18, 2019 at 11am. A memorial service will be held at Silverdale Lutheran Church in Silverdale on Saturday, March 2, 2019 at 1pm. All are welcome to attend both events. Donations may be made in Edie’s name to the Silverdale Lutheran Church and the Kitsap Regional Library.

Edith Lucille (Rimple) McKelvy, 82, was born on February 7, 1937 in Bremerton, WA, and died peacefully in Silverdale, WA on February 10, 2019, surrounded by her family. She was pre-deceased by her parents and is survived by her husband James... View Obituary & Service Information

The family of Edith L McKelvy created this Life Tributes page to make it easy to share your memories.