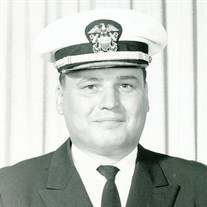 Ed was born into an immigrant family on March 25, 1940 to Edo Bruno Illeene (Almas) Corradi. His father was the first of the family to be born in America. In high school he wrestled and was a Golden Gloves boxer and as many in his day, worked various jobs until he graduated, then soon afterward, he joined the Navy. Ed met Barbara in an unusual way. It seems he had taken her roommate on a date and when he took her home, he met Barbara. After that he never went out with the roommate again, and he and Barbara began dating. The first date was accepted by her because she wanted to go out for a good meal. They were married on June 13th, 1964, and yes, of course it was a Friday. If anyone here is superstitious, their marriage should dispel at the Friday the 13th thing, because it lasted just over 53 years. Just like the way they met, there is always more to the story. Barbara preceded him in death about nine months ago. Ed was part of the Silent Service of the United States Navy. He was a submariner. That meant a bunch of deployments, being incommunicado for months at a time, relocating every two to three years, whether you wanted to or not in many cases. The other interesting part of their Navy life was that Ed was also a Mustang Naval Officer. He went from the low privilege life of an E-2 all the way to at least Senior Chief Electrician, then to Warrant Officer and Finally to Lieutenant. The dynamics of those different lifestyles are difficult to explain but had many challenges. During their Navy career together, they traveled to and were stationed at places like Rota, Spain; Norfolk, VA; Charleston, NC; Groton, CT where they lived in the apartment above where Mystic Pizza was located and featured in the movie Mystic which Julia Roberts starred in as Daisy Arujo. There were other places of course. Tony was born in Connecticut and Geno was born in Hawaii. They finally settled in Port Orchard after a very interesting life together of good times and hard times and countless memories of life and living it to the fullest. He will be dearly missed by those whose lives he touched.

Ed was born into an immigrant family on March 25, 1940 to Edo Bruno Illeene (Almas) Corradi. His father was the first of the family to be born in America. In high school he wrestled and was a Golden Gloves boxer and as many in his day, worked... View Obituary & Service Information

The family of Edward Bruno Corradi created this Life Tributes page to make it easy to share your memories.