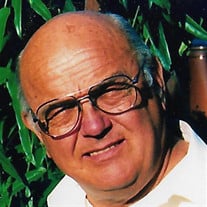 Veteran Edward "Ed" Kvistad, 88, died at home surrounded by his family. He was born November 16, 1928 in Bremerton to Oscar A & Tessie L (Burns) Kvistad. He attended Bremerton High School, joined the Army in 1947 and was Honorably Discharged in 1949. Bremerton Raceway was a favorite past time, where he enjoyed watching drag races and working on cars with friends. After serving his country, he worked at Puget Sound Naval Shipyard. He then moved to California where he worked for Honeywell as a Diesel Mechanic and he raced Jalopies at Gardina Raceway. He married Carolyn in 1957 while in California. They moved back to Washington in 1959 and Ed worked with his brother Ivan for the Kitsap Coach Service. He purchased the Coach Service, owned and operated the business for 35 years before retiring in 1992. Ed raced at several different racetracks during his life. He raced at Silverdale, Spanaway, Skagit and Skyvalley Speedways, with his favorite being Elma Raceway. Ed was inducted into the first inaugural Elma Auto Racing Association Hall of Fame in 2009, where he was honored for his craftsmanship for building frames. Ed was the kind of person who would help everyone in any way he could. He built low cost, safe frames that won races and championships on most of Washington's race tracks. A true craftsman, he could build or fix just about anything. More recently, Ed could be found tinkering in his garage where he was building a 1923 Ford Flathead Model-T Rat Rod from the ground up. Unfortunately, he did not get to finish, so his son Edward will have the honor of completing the project. He then plans to drive it to his father’s final resting place. Ed also enjoyed spending time with family and friends, enjoying nature, daily crossword and working on the farm. He and Carolyn exercised Monday, Wednesday and Friday with the “Cardiac Kids.” He never missed a NASCAR race, the Seattle Seahawks and old Westerns. In the evening after dinner, he enjoyed Wheel of Fortune and Jeapardy, both of which he was quite good at. Ed was preceded in death by an infant son, brothers Jack and Ivan Kvistad and dear friend Lowell Hite.. He is survived by his sister Allene Ramirez and his wife of 60 years Carolyn, their children Barbara (Michael) Melton, Edward Kvistad, Catherine (David) Rash and Judith (Kenneth) Nichols, ten grandchildren; Jeffrey (Elizabeth) Rogers, Molly Drapeau , Melissa (Scott) Rasband , Abigail Logan, Becky Mathews (Josh) Guilfoyle, Caleb Mathews, Keith (Brittany) Mathews, Justin Rash, Amanda (William) Wykes & Alexander Nichols. Great grandchildren, Caitlyn, Logan, Capri, Sienna, Elese, Ethan R, Ethan N, Eiden & Marcus. He also leaves behind his cats Bonnie and Clyde. "And in the end, it's not the years in your life that count. It's the life in your years." (Abraham Lincoln)

Veteran Edward "Ed" Kvistad, 88, died at home surrounded by his family. He was born November 16, 1928 in Bremerton to Oscar A & Tessie L (Burns) Kvistad. He attended Bremerton High School, joined the Army in 1947 and was Honorably Discharged... View Obituary & Service Information

The family of Edward Erling Kvistad created this Life Tributes page to make it easy to share your memories.

Veteran
Edward &quot;Ed&quot; Kvistad, 88, died at home surrounded by his...