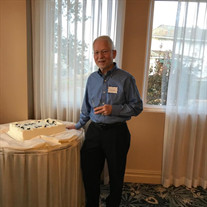 Ed was born in Carson City, NV to Louise Stahl and Frederick Woods. Ed’s father was working with the CCC and when World War ll broke out he was sent overseas with the Army. Ed, his brother, and his mother moved back east, finally settling in New Jersey where his mother and father were from. Ed grew up in Seabright, NJ, a small town on the Jersey shore. After graduating from high school, Ed spent a year as a draftsman. He was then encouraged by a close friend to join him at the University of Miami. He graduated from the U of Miami in 1964 with a BS degree in electrical engineering. His first job, after graduating, was with General Electric in Schenectady, NY. While there, he attended classes at Rensselaer Polytechnic Institute, receiving his master’s degree in engineering. From Schenectady his work took him to Michigan and a job with General Motors, and then on to Ohio and work with Reliance Electric. In 1985, Ed, his former wife, and their two sons moved to Kitsap County and Ed began work for Boeing. He retired from Boeing in 2001 but continued working part time as a consultant. Ed and his wife, Nancy, married in 1989. They have spent the past 33 years loving their life together. They enjoyed travelling both in the United States and overseas. They were life companions, whether attending a ballet, a play, or museum, or sitting quietly, together, simply reading. Ed loved his family that had grown to include many others when he and Nancy married. Certainly, his greatest joy was spending time with those he loved! Ed was always active! He loved sailing, whether it was racing or cruising in his sailboat, Spectrum. He was always eager to include others in these adventures. He was a runner and competed in several marathons and half-marathons. After taking several yoga classes, he took classes so that he could also teach yoga! Ed began hiking with the Monday Morning Hikers after he retired and hiking became a passion in his later years. He loved to sing and sang tenor with the West Sound Chorus, a barbershop chorus. He also sang with the choir at the Kitsap Unitarian Universalist Fellowship. This was a joy he shared with his wife, Nancy. Membership at Kitsap Unitarian Universalist Fellowship was an important part of their life together and he contributed in so many ways. A friend recently wrote “I always knew that things would be alright if Ed was there.” That says volumes and speaks to how much he will be missed! He is survived by his wife, Nancy Sleight; his sons, Andrew (Tina Scott); Adrian; foster daughter Kirstin Grace; step-son, Jamie Jamison; step-daughters, Ellen (Mattias) Larsson; and Courtney (Mark) Capriotti; and also, six beloved grandchildren. Additional family members include: his brother Erik (Christy) Woods; half-brother, Jon Eilenberger; and two half-sisters, Jahala Woods and Janine Woods.

Ed was born in Carson City, NV to Louise Stahl and Frederick Woods. Ed&#8217;s father was working with the CCC and when World War ll broke out he was sent overseas with the Army. Ed, his brother, and his mother moved back east, finally settling... View Obituary & Service Information

The family of Edward James Woods created this Life Tributes page to make it easy to share your memories.

Ed was born in Carson City, NV to Louise Stahl and Frederick...