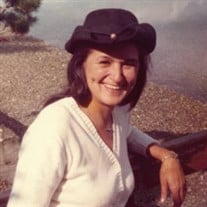 Eileen grew up in White Center, an area of West Seattle. She was born to Joseph and Mary Hourie on Dec, 17, 1929. She went to Holy Family Catholic school for her elementary years. She attended High School in West Seattle. She lived in a house that her parents built, along with her brother (Joseph) and her three sisters (Anne, Charlotte and Beatrice). Roller skating was very big at that time. She and her sisters all skated and they became skating champions with the Rat City Rollers. She married at an early age to Harold Effrig with whom she had 5 children (Diane, Bob, Sharon, Mark, and Shelly). Her niece, Catherine Jones, lived with them for many years as well. When the kids got older she and Harold divorced. Later she married Don Lofthus, and eventually they moved to Belfair. Don passed away in 1999 and after that Sharon moved in to help her. They stayed together until 2014 when Sharon passed away unexpectedly. She was a woman of many trades. Early on she dabbled in real estate sales. Her next endeavor saw her breaking down barriers by becoming a security guard where she worked at the Seattle Center and Sea-Tac Airport. She was tall, attractive and a well rounded person for this job, where her biggest fear was having to hurt someone if the situation called for it. Later she worked for Demitries, where they made high end wool sweaters for snow skiing. After Don retired they moved to Belfair, a community they absolutely adored. Here she worked for a florist and at a nursery where she stayed for several years until she retired in the early 2000’s. She always had a green thumb and had to have lots of flowers around. She loved everything about the outdoors and was always a very good athlete. Water skiing, camping, roller skating, digging for clams, and getting oysters were some of her favorite activities but her favorite by far, was bowling. She became an accredited bowler, traveling, winning, and filling her trophy case was her passion. Her trophy case is full of many meaningful memorabilia items that she cherished. Baseball, car racing, and sports in general were also among her favorites. She traveled all over watching her kids and her grandkids help continue to fill her trophy case with a vast array of trophies. Later in life she had many hobbies and things she loved to do at home. These included knitting, coin collecting, watching her favorite programming, and at the impressive age of 81 she even learned how to use Facebook. She enjoyed cooking, watching candles burn, and spoiling her dog, Jake. This became her daily routine. Bunko allowed her to spend time with her friends while often winning a few dollars. This was a highlight for her. She loved family and looked forward to family reunions and the Christmas gatherings. She was joyful, forgiving, and loved unconditionally. She brought this joy and happiness to everyone she met by her kind words. Eileen’s legacy of love and hope will live long in the hearts of everyone lucky enough to be apart of her life. Eileen passed away July 31, 2018 at the age of 88. She is survived by Diane Lutovsky of Stanwood, Bob Effrig of Wenatchee, Mark Effrig of Belfair, Shelly Effrig of Shoreline. She has 12 Grandchildren, 13 Great grandchildren, and 5 Great Great Grandchildren. She was preceded in death by her husband Don in 1999 and her daughter Sharon Danger in 2014. Services will be held at Rill Chapel August 11, 2018 at 12pm. Reception to follow. A celebration of life will continue at Eileen's residence in Belfair. All are welcome.

Eileen grew up in White Center, an area of West Seattle. She was born to Joseph and Mary Hourie on Dec, 17, 1929. She went to Holy Family Catholic school for her elementary years. She attended High School in West Seattle. She lived in a house... View Obituary & Service Information

The family of Eileen Dolores (Hourie) Lofthus created this Life Tributes page to make it easy to share your memories.

Eileen grew up in White Center, an area of West Seattle. She...