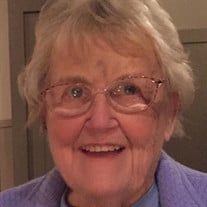 Eileen Norma Miller was born October 7, 1929 to Nels and Ida (Hansen) Jonsen in Seattle. After a long battle with cancer she passed away on January 20, 2018 in Southworth where she had been fiercely proud to live all her 88 years. She attended Harper Grade School, graduated from South Kitsap High School in 1947 and studied at the University of Washington. She married Harvey Miller on May 6, 1951. She is survived by husband Harvey, brother Gordon (Barbara) Jonsen of Seattle, daughters Kris (Craig) Tompkins of Tahuya, Michelle (Gary) Meyer of Redlands, CA and Jana (Raed) Fahmy of Gig Harbor, grandchildren Kurt, Karly Nicole, Kelsey, and Kyle Meyer, Andrea, Jared, and Daren Fahmy and step-grandchildren Tammy (Gary) Forman and Travis Tompkins and four great-grandchildren. Raised in a community of Norwegian family/friends, Eileen passionately embraced this heritage. Her infectious enthusiasm for her Nordic roots inspired and sometimes amused all who knew her. With the sea in her blood, exploring Northwest waterways on their boats was the realization of a life dream. She had a colorful resume with an employment history beginning at the Seattle Sears, assisting a buyer, followed by a period of several years devoted to homemaking and raising her daughters interspersed with cooking at Sunset Lake Summer Camp. While Eileen’s Viking strength stood her in good stead during a brief stint at a pre-cast yard working with marble and concrete, she finally found a fit for her talents in the Treasury Department of the Seventh-Day Adventist Conference Headquarters, where she remained until her retirement. A consummate hostess, Eileen was ever at home in the kitchen. She truly loved feeding people, constantly perusing cookbooks and magazines for new recipes. Many will remember her as an extraordinary cook who could always be counted on to provide an array of fabulous fare in vast quantities. A lifelong prankster, Eileen’s practical jokes confused, infuriated and/or amused her targets. The tales of her exploits were often told to appreciative chortles from the hearers or gasps of surprise from her grandchildren. For decades raucous rounds of Rook and other games were enjoyed locally on a Saturday night. In later years she and Harvey, as part of a faith based group of friends, traveled to many exotic destinations sharing memory making adventures. Her favorite location, however, was her Southworth beach, rich in childhood memories. She was an avid quilter, enjoyed gardening, tole painting and other crafts, also reading and solving crossword and logic puzzles. Eileen’s world revolved around her family and the SDA church of which she was a member for over 80 years. She typically put the needs of others ahead of her own, her fight to live on fueled by concern for how Harvey would cope without her. Eileen always remained a central part of her daughters’ lives. She had a deep and unique bond with each of her grandchildren sharing various activities and running jokes. Stubborn and staunch, generous and genial, loyal and loving, she will be deeply missed by her close knit family and the many friends with whom she shared her zest for life. Never wanting to inconvenience anyone, she was adamant that no service be held. Remembrances may be made to the Maranatha Volunteers International, 990 Reserve Dr., Suite 100, Roseville, CA 95678-1387 or www.maranatha.org.

Eileen Norma Miller was born October 7, 1929 to Nels and Ida (Hansen) Jonsen in Seattle. After a long battle with cancer she passed away on January 20, 2018 in Southworth where she had been fiercely proud to live all her 88 years. She attended... View Obituary & Service Information

The family of Eileen Norma Miller created this Life Tributes page to make it easy to share your memories.