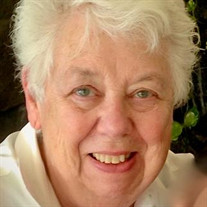 Elizabeth Anne (Scott) Drew, May 29, 1935-June 26, 2020 Our Mom recently journaled, &#8220;I often marvel at the goodness that surrounds my life&#8230;the ease of piloting my course. How I ended up in a place and time of comfort when millions... View Obituary & Service Information

The family of Elizabeth Anne Drew created this Life Tributes page to make it easy to share your memories.