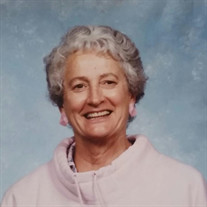 Elizabeth June Gormley Recknagle Sorenson (Betty) was born December 30, 1926, and passed away July 24, 2020. Betty was one of 13 siblings. Her father had 9 children from his first wife and after she passed away Emmett Gormley married Lucy Tax. Betty was the first of 4 children from this marriage. She was very close to all of her siblings and especially Mary, Jim and Ted. She spent a good portion of her childhood in Medicine Lake Montana and then the family moved to Port Orchard Washington during World War II. She attended and graduated from South Kitsap High School. Betty worked in the Puget Sound Ship Yard during and after school in the supply department. Her upper class mate, Kenny Recknagle had enlisted in the Army. They kept in contact during his overseas service as an infantryman in the 104th Timberwolf Division and they continued to correspond until he was discharged. They married in June of 1946. Ken and Betty Recknagle made their home in South Kitsap and had 8 children. She is survived by Edward (Marlys), Thomas (Charlotte), Denise (Steve) Gibbons, Kurtis (DaJuan), Susan (Lance) Newkirk, LuAnne (Tom) Eyles, 16 grandchildren, 20 great grandchildren and brother Ted Gormley. Preceding her death is Kenneth Recknagle, Son Mark Joseph Recknagle (1953), Daughter Brenda Recknagle Inskeep (2020) and Arthur Sorenson. Some of her favorite activities included camping, fishing, and playing water sports at the family Hood Canal property. They attended Saint Gabriel Catholic church. The couple were industrious in building a rental duplex in Port Orchard WA out of decommissioned surplus homes from Bremerton WA after the war. They also owned and operated a Christmas tree farm in Shelton WA. They were married for 37 years until Kenneth passed away in December of 1984. Betty met Art Sorenson in 1991 at a Timberwolf reunion and married soon after. She moved to Lake Oswego Oregon and made many friends in the Rosarians, Republican Women’s club, Timberwolf Association and at the Resurrection Catholic Parish. They enjoyed the retired life traveling often and spending as much time as they could with friends and family. She loved to paint and the family treasure her many paintings and works of art. They were married for 26 years when Art passed away in November of 2018. At that time Betty came to live in Olympia Washington to be close to her two daughters LuAnne and Brenda. Betty had a contagious smile and was quick to laugh. She loved deeply and would do anything for those she loved. She will be missed dearly by her family and friends. She survived The Great Depression, WWII, Polio, had a deep faith in God that sustained her family and was talented in too many ways to count. Always hard working she sewed, gardened, cooked, canned, painted, handy with any tool, was thrifty and industrious. Truly one of the Great American Generation.

Elizabeth June Gormley Recknagle Sorenson (Betty) was born December 30, 1926, and passed away July 24, 2020. Betty was one of 13 siblings. Her father had 9 children from his first wife and after she passed away Emmett Gormley married Lucy Tax.... View Obituary & Service Information

The family of Elizabeth June Recknagle Sorenson created this Life Tributes page to make it easy to share your memories.