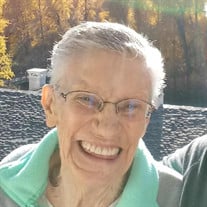 Esther was a loving and hard working woman. She loved her family, Jesus Christ and many other’s who's life’s she touched. She was an angel to many family's whose children she lovingly cared for. She was the soul of her family and her presence was always felt be it good or bad! :) She was born August 8, 1938, in Pineville, Missouri to Frank and Nina Kenney. They moved to Humboldt County, California in the early fifties where she went to high school. In 1955 she was married to William Gage. In1960 they moved to a small town, Oakley, California in Contra Costa County. They had three children, a daughter, Valerie, born in Scotia, California and two sons, Dennis and Mark, born in Antioch, California. She was a loving mother who raised her children and worked hard for many years. She was able to semi retire in 2001 at the age of 63. Esther was raised as a Pentecostal and volunteered at many of the churches she attended. She leaned heavily on her faith when her 20 year old son, Denny died in 1980 in a devastating boating accident and then later in life when she separated from her husband of 32 years. Through all of it she became a stronger and a more independent woman. Esther moved to Port Orchard, Washington in 2001 with her daughter, Valerie, her son, Mark, her grandson, Jesse and four fur-babies. The next nineteen years was a joyful time for her as she loved and raised her young grandson and the neighbor kids, Jack and Allie. The whole cul-de-sac new her as “Grama Esther” which warmed her heart. In 2019 she moved to Belfair, Washington with her family. Her and her daughter had some really fun times the last year traveling in their RV, planting flowers in the warm sun and going out to dinner just about every night! On behalf of Valerie and the rest of the family, they want to extend special thanks to all who joined in caring for caring for their mom after her passing.

Esther was a loving and hard working woman. She loved her family, Jesus Christ and many other&#8217;s who's life&#8217;s she touched. She was an angel to many family's whose children she lovingly cared for. She was the soul of her family and... View Obituary & Service Information

The family of Esther L. Gage created this Life Tributes page to make it easy to share your memories.

Esther was a loving and hard working woman. She loved her family,...