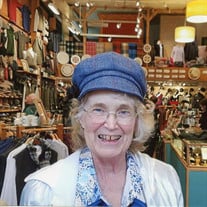 Esther Dahlner Hunsaker died on March 22, 2019, due to a glioblastoma, an aggressive brain cancer. She was born to Florence Dudek Dahlner and Harry G. Dahlner I on April 20, 1943, in Wolf Point, Montana. She moved with her family to Port Orchard in 1951 and resided there the rest of her life. Esther attended South Kitsap schools where she made many lifelong friends. Esther loved being involved with SKHS Class of '61 reunion activities, including the weekly Friday night dinners at McCormick Woods. On August 19, 1961, Esther married James E. Murphy, Jr. They had two children, Ed Murphy (Pamela) and Marcella Murphy (Tracy Belvill). On September 23, 1977, Esther married Gary R. Hunsaker. Her family grew to include stepdaughters Jeanette Johnson (Tom), Gina Roth, and granddaughter Gabrielle. Esther and Gary spent many evenings in the company of their friends at local Port Orchard watering hole, The Beachcomber Bar and Grill. Esther worked in her father's accounting firm for many tears providing bookkeeping for small businesses in Port Orchard and loved every minute of it! Over the years, she and Gary often travelled to South Dakota to visit family, friends, and Esther's favorite aunt, Jerry Abel. Esther enjoyed socializing with her family and friends, travelling, quilting, antiquing, reading, watching and supporting her favorite sports teams--especially the Seahawks, Mariners, and the South Dakota State University Jackrabbits, and completing the daily crossword and sudoku puzzles. Esther was predeceased by her parents, her brother Harry G. Dahlner II, and Carolyn Kunzl Lawrence, her best friend since the first day of their sophomore year of high school. Esther is survived by her husband Gary, her children and their families, her sister Ann Willette, and many nieces and nephews. In lieu of flowers, please make a donation to the Friends of the Manchester Library or to breast cancer research.

Esther Dahlner Hunsaker died on March 22, 2019, due to a glioblastoma, an aggressive brain cancer. She was born to Florence Dudek Dahlner and Harry G. Dahlner I on April 20, 1943, in Wolf Point, Montana. She moved with her family to Port Orchard... View Obituary & Service Information

The family of Esther Harriet Dahlner Hunsaker created this Life Tributes page to make it easy to share your memories.