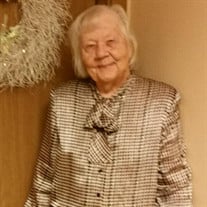 Evelyn Smith Carlson, 90, of Port Orchard, WA went home to God on November 24, 2017 at St Anthony’s Hospital in Gig Harbor, WA. Evelyn was born on April 21, 1927 in the Yakima Valley. Her father Frank worked for the railroad while her mother Alma raised five children and helped to work small properties owned by the family. Evelyn remembered a great childhood, having close friendships with her three older sisters and brother Oren. She remembers always having a lot of room to roam, usually accompanied by an entourage of pet cats and dogs, her adventures including a lot of tree climbing. Her mother Alma brought her up to have a calm and courageous spirit; before marriage, Alma was the first woman in her Midwestern town to learn to drive a motorcar and she also made daring hats in the local hat shop. During her school years, Evelyn especially enjoyed playing tennis. She played for the Selah High School team, winning the Eastern Washington Women’s Championship. She never lost a match in league play! During the time Evelyn was becoming an excellent tennis player, she met her future husband Leroy at age 15 and when he was 20. They played many hours of tennis together, “courting” on the court. They also enjoyed big bonfires near frozen wintry ponds, meeting up with friends for ice skating and hot chocolate. During one summer, Evelyn stayed with one of her sisters in Everett while she worked at the aircraft factory riveting inside airplane wings. The war was still raging in the Pacific and changed and ended many lives. After graduating from high school, Evelyn attended Whitman College for a year but transferred to nursing training in Wenatchee when the country put out a desperate call for more nurses. She became a registered nurse and her fiancé Leroy spent time in occupied Japan. Evelyn and Leroy were able to marry January 14, 1950, during one of the worst snowstorms the Northwest had ever experienced. Leroy barely made it over the Cascades by hitching a ride with a logger who drove a specially rigged truck with huge tires and chains. After marriage, the couple lived on Queen Anne Hill and Evelyn worked at Children’s Hospital while Leroy attended Seattle Pacific College. Then they moved to Chicago where Leroy attended North Park Seminary. Evelyn and Leroy spent some years in the Midwest and had three children, Deborah, Daniel, and David. Evelyn missed her family and the mountains of the Northwest very much so moved back with Leroy and her children when she was about 30. She enjoyed thrilling horseback trips, hiking and camping in the Cascades for many years. She was able to see her parents, sisters and friends outdoors for activities frequently and enjoyed that dimension of her life greatly. Evelyn did a lot of entertaining during those years and continued to do all through her years including many fellowship times with the Port Orchard United Methodist Church. She was involved in XYZ (Extra Years of Zest) group, women missions and youth camping trips. At 50, Evelyn reactivated her nursing license and worked until 70 as an R.N. charge nurse. All of us who knew her remember Evelyn as calm, steady, kind, fun-loving, and courageous. Evelyn is survived by her daughter Deborah Swigart and her husband Bill, of Bremerton, Washington, and their children Katherine (Jason) Wax of Portland, Oregon and Sterling (Anna) Swigart, of Seattle, Washington; her son Daniel and his wife Anita, of Port Orchard, Washington, and their children Christopher (Briana Chilcote) Carlson of the Bay Area in California and Jessica Carlson (Jesse Derma) of Issaquah, Washington; and her sister-in-law Alice Presson of Yakima, Washington. She is predeceased by her husband Leroy, her son David, brother and sisters. A memorial service celebrating Evelyn’s life will be held at Port Orchard United Methodist Church on Tuesday, December 19, at 1 PM. The service will be followed by a reception in DeVries Hall at Port Orchard United Methodist Church. In lieu of flowers, please consider a contribution in Evelyn’s memory to the Port Orchard United Church or the Washington Trails Association (www.wta.org)

Evelyn Smith Carlson, 90, of Port Orchard, WA went home to God on November 24, 2017 at St Anthony&#8217;s Hospital in Gig Harbor, WA. Evelyn was born on April 21, 1927 in the Yakima Valley. Her father Frank worked for the railroad while her... View Obituary & Service Information

The family of Evelyn Smith Carlson RN created this Life Tributes page to make it easy to share your memories.