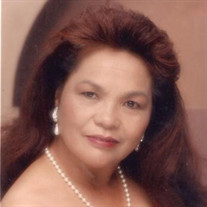 Faye Palacios Reynolds went home to our Lord early Sunday morning November 21, 2021 at St. Anthony Hospital in Gig Harbor surrounded by family and in the arms of husband Steve. Faye was born Filomena Rabago Palacios on Saipan, Northern Marianas Islands on August 4, 1946 and was the daughter of Silvestre Santos and Rosalia Rabago (Salas) Palacios. When Faye was four, the family moved to the village of Agat on Guam where she grew up. In 1967 she married Richard Milliken Barnard, a sailor stationed in Guam who predeceased her and with whom she had three daughters. Over the next seventeen years the family would be stationed in California, Florida, Hawaii, Spain, Idaho, and back to Guam with stops in Charleston, SC and Holy Loch Scotland. In 1988, on Guam, she met and later married Steve Reynolds, an officer stationed on USS WHITE PLAINS (AFS-4) homeported in Guam. They enjoyed over thirty years together travelling the world with duty stations in Norfolk, VA, Rodman, Panama, Newport RI, Ingleside, TX, Sasebo, Japan, and ultimately Washington state where Steve later began a second career as a Merchant Mariner. Their travels together also included most of the United States, South Korea, Singapore, Indonesia, Mexico, Costa Rica, Argentina, Chile, and Uruguay. Faye’s family was everything to her. She also loved travelling, bowling, playing Bingo, and watching “her” Mariners. Faye was a wonderful wife, friend, mother, grandmother, and great grandmother who will be sorely missed. Faye also loved her country and was a true patriot. She was the ultimate Navy wife for over forty years. She was preceded in death by her parents and her sister, Rosalia Palacios Chaco. She is survived by her loving husband Steve, brother Antonio Palacios, daughters Lorna Jean Camacho (Gil), Lorraine Marie Garcia (Gabe), Leslie Barnard Reyes (John), thirteen grandchildren, great grandchildren, and numerous nieces and nephews. Our hearts are heavy. A Viewing will be held on Tuesday, November 30, 2021 from 4:00 PM-8:00 PM at Rill’s Life Tribute Center located at 1151 Mitchell Ave. Port Orchard, WA 98366. A Celebration of Life Memorial service will be held Wednesday December 1, 2021 from 11:00 AM-12:00 PM at St. Gabriel Church located at 1150 Mitchell Ave, Port Orchard, WA 98366. www.stgabrielpo.org/video-stream-mass

The family of Faye P Reynolds created this Life Tributes page to make it easy to share your memories.