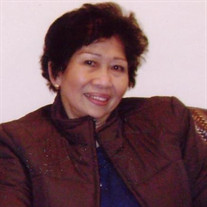 Fe Villar Abarquez was born in Jose Panganiban, Camarines Norte, Philippines to Teodoro Bamba Villar and Raymunda Jardin on the day of December 5th, 1939. Affectionately known as Mama, she was a loving and caring woman who put her family before anything else. She was married to Emigdio N. Abarquez, Sr. and gave four wonderful children: Helen Margaret, Emigdio Jr., Leonard Michael, and Eric Nelson. After becoming widowed in 1995, she moved in with her eldest son and his wife. They would travel together over the years to different US Navy duty stations, including Yokosuka, Japan; Honolulu, Hawaii; and Bremerton, Washington. She would become very fond of Hawaii, and decided to stay there for an extended time to make a living for herself. She became employed at a security agency affiliated with Honolulu International Airport, a job she held for over 10 years. She retired from the work force in 2012, and decided to move in with her eldest son and his family again in Port Orchard, Washington. When she returned to live with the family, she was welcomed with open arms and formed long-lasting friendships with those who came to know her. She enjoyed her time talking stories over a cup of coffee or tea, watching TV in her room, and cooking for her family or her house guests. She was also an avid shopper, as her shopping trips with her daughter-in-law would often last the whole day. It was not so much a shopping trip for her, but more like wanting someone to come along with her and keep her company. She enjoyed and valued the company that her family and friends provided her, and it showed to her that everyone loved and cared for Mama Fe. The memories that she provided in this life will live on eternally in our hearts and thoughts. Mama Fe is survived by her four children, a great quantity of grandchildren, and four great-grandchildren. She will be sorely missed.

Fe Villar Abarquez was born in Jose Panganiban, Camarines Norte, Philippines to Teodoro Bamba Villar and Raymunda Jardin on the day of December 5th, 1939. Affectionately known as Mama, she was a loving and caring woman who put her family before... View Obituary & Service Information

The family of Fe Villar Abarquez created this Life Tributes page to make it easy to share your memories.