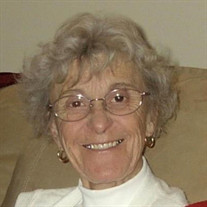 Francie was born in 1925 at Bremerton Hospital to Frank and Muriel Pierce. Her father was a prominent businessman in Bremerton where he and his brothers owned and operated Pierce Brothers meat market. Francie grew up in Bremerton. She attended Our Lady Star of the Sea Catholic School, and then went to the Visitation Academy boarding school in Lakewood, south of Tacoma. She loved horses and dogs. She spent many happy hours riding Babe, a thoroughbred that her father acquired from Longacres race track. Her parents moved from Bremerton to Riverton Heights immediately after World War II. In 1946, Francie met her husband, Herschel Earl Jones, at the Trianon Ballroom in Seattle. He was an ensign in the Navy at the time, awaiting demobilization after the war. They were married shortly afterwards in the Navy Chapel in Bremerton. (They celebrated 73 years of marriage in October of 2019, shortly before Earl passed away later that month.) In the early 1950s, Francie and her mother, Muriel, ran a lunch counter, the Blue Bell Café, at the Pike Place Market, allowing her daughter, Earline (then age five) to run wild in the Market. Later, Francie and her mother ran a laundromat in Riverton Heights. In the 1960s, Francie went back to college and graduated from Seattle University in 1964 with a degree in Education. She then taught as a grade-school teacher for 20 years in the Highline school district. Her passion was teaching reading. She loved watching her young students become readers and lovers of books. In 1979, Francie and Earl retired and moved to a property originally purchased by her father, on the North Shore Road in Belfair, where they lived for the remainder of their years. Francie is survived by her daughters Earline and Charlotte, and by five grandchildren and two great-grandchildren. Her son, Jim, passed away in 2006, and her husband, Earl, died in October of 2019. At the end of her life, her great desire was to place her life in the hands of Jesus, and to receive by Christ’s grace the surpassing gift of eternal life, where she looked forward to being reunited to those she loved who had passed on before her, especially her husband, her son, her older brother Donald, and her parents. After a fall and a brief stay in the hospital, Francie received the last sacraments of the Church and was visited by her family. She died with her daughter Earline at her bedside on Sept. 16, 2020.

Francie was born in 1925 at Bremerton Hospital to Frank and Muriel Pierce. Her father was a prominent businessman in Bremerton where he and his brothers owned and operated Pierce Brothers meat market. Francie grew up in Bremerton. She attended... View Obituary & Service Information

The family of Francie M Jones created this Life Tributes page to make it easy to share your memories.

Francie was born in 1925 at Bremerton Hospital to Frank and Muriel...