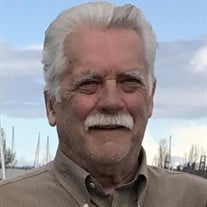 Francis (Bob) Robert Metzger of Port Orchard, WA died unexpectedly on September 30, 2017. He was 74 years old. Bob is survived by his children Scott (Lynn) Metzger of Port Orchard, WA; Jennifer (Tony) Deuer of Port Orchard, WA; Kurt Metzger of Seattle, WA; and Step-Children Joel (Hollis) Ledbetter of Buckley, WA; and Josh (Melisa) Hauth of Boise, ID. Very dear to his heart are his grandchildren Robby Metzger of Bremerton, WA; Kaitlyn Deuer of Port Orchard, WA; Kyle Metzger of Port Orchard/Pullman, WA (Go COUGS); and step-Grandchildren Regan Ledbetter and Kennedy Ledbetter of Buckley, WA; and Storm Hauth, Kyle Hauth and Yeager Hauth all of Boise, ID. Siblings include Shirley Hopper of Climax Springs, MO; Nancy Winacapaw of Watts, OK; Joe Metzger of Wrightsville, GA; Lorraine Parker of Galt, MO; and many nieces and nephews. He is preceded in death by his wife Barb Hauth, July 2005. Bob was born March 25, 1943 in St. Louis, Missouri to Walter and Irene Metzger. After serving his country in the USAF from July 1960 to July 1966 as a Jet Engine Mechanic, he went to work for Ashgrove Cement while living in Kansas. After working for M&M Foundations in Wyoming, he then took a job with Cougar Construction in Wyoming as a Construction Foreman. Bob retired from Highline Hospital in Burien, WA as a Maintenance Engineer in 2007. Those who had the pleasure to know Bob knew that his biggest joy in life was his family and enjoyed embarrassing his children and grandchildren, a practical jokester with his fart machine as his favorite. While at Highline he enjoyed playing jokes & harassing the nurses. He lived life to the fullest and was always helping other people. Hobbies included golfing and woodworking, as well as travelling and football (Kansas City Chiefs, currently 4-0!) as well as working on cars and attending car shows with his son Scott and Grandson Kyle. Bob enjoyed country music and his favorite song to dance to and sing was "Baby's got her Blue Jeans" on by Mel McDaniel. A graveside memorial will take place at Sunset Lane Cemetery in Port Orchard, WA Friday, October 20, 2017 at 11:30 AM with a Celebration of Life immediately following at a private residence (Please contact the family for address) All are welcome to attend and celebrate the life of Bob Metzger.

The family of Francis "Bob" Robert Metzger created this Life Tributes page to make it easy to share your memories.