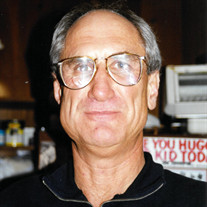 Words that describe this life- Fred had many words to describe his life: Fun, smart-ass, sarcasm, generous, caring, Grandpa, thoughtful, witty, family, cribbage, fulfilled, jokester, full of life, DAD, provider, simple, happy, my best friend. He embodied many more attributes as well and was generally just a lot of fun to be around. Favorite stories of this life- Fred told so many stories its really hard to keep track. Some crass, some hilarious, and some simply historical about the family. Here are just a few snippets of some stories that stood out off the tops of our heads: His father bought a 2 cylinder Lloyd Wagon and it would go from 50mph to 10mph through a big puddle but…. It got 100mpg! Stories about his sisters giving him grief growing up and taking care of him as he was the baby of the family. Sisters Ruth, Gretchen, Pauline, and Mary Getting drunk with Uncle Oscar…. Good Times. Wearing spats working at ALCOA Having to deal with an extra large #2 in the toilet and having to get a stick to cut it in half. I have never heard the end of this one! Having to survey a rendering plant… the smell was so bad he could still smell it to this day! Laughed hysterically at my mother, Shirley, as after she would sedate and take the cat, Jesse, to the vet… the cat would proceed to rage and chase after her once home. Psycho Cat! His dad, Otto, and hit cronies playing cribbage, ‘packing wood’, and shuffling by mixing the cards on the table to get to the next game quicker. “Ready Cribbage”! Fondest Memories- So many fond memories, we hope many of you add to the wall for us! Having him in our lives for so long there just isn't enough space to cover this one. Here are some really recent ones: Colin’s Birthday in Chelan 2017. Tasting wine, champagne, gambling with his grandson for the first time Amy’s Travis Tritt concert with Fred Coffee at Whiskey Gulch in the mornings where he frequented almost daily. Was his place and we had many a great conversation and hug. I miss those times dearly. Christmas 2017 at Kathy’s and Dan O’Briens house. It was our last Christmas together and one we will cherish forever. Significant Accomplishments- Fred had many significant accomplishments and list more on his wall as you friends and family think of more too! Here are just a few: Father of Four Children…. Rhonda, Allan, Amy, and Robert Grandfather… Colin, Dash, Brandon, Xavier, and Jessica (Love his grandkids dearly) Worked his way to owning his own successful business, Fox Fire Prevention, Inc., with only a high school education. A self-made entrepreneur. NICET Level III Engineer in the State of WA A good friend and mentor to many Retired at the age of 65years old Occupation- He worked at a few places but most notable was Fox Fire Prevention, Inc. Self Employed, Fox Fire Prevention, Inc. Fire Sprinkler Designer, NICET Level III President/Owner Business Associates- Robert McGee Kristi McGee Sue Vanden Bos Adam Cole Personal Activities- Golfing & Golfing Trips with his Friends Driving Walking Travel with Family Grandkids Events and Activities Cribbage Coffee at Whiskey Gulch Daily Favorite Family Activities- Birthday Parties BBQ’ing 4th of July Christmas Thanksgiving Sporting Events Concerts Travel Boating Kids Band Concerts, Activities, Water Polo Meets, Karate, Grandparents Day, Soccer Games, and School Events Hobbies- Music Golf Driving Bird Watching/Feeding Walking Daily Feeding his favorite horse across the street History Channel Programming Favorite Experience in Life- Being with family and friends at holidays, traveling, and life events Personal experiences: Spending One Last Trip with Him in Lake Chelan this Past December. I wish I could have one more. *Family camping trips as a kid and I really enjoyed taking him to a Travis Tritt concert for his 70th birthday. He was also the first visitor to hold and meet Xavier when he was born. I also remember singing along with him in the car to the funny songs by Ray Stevens. Favorite Places to Spend Time- Whiskey Gulch CoffeePub Uncle Dave’s Caf? His Chair at Home Relaxing Hot Tub Family Trips Favorite Poem or Scripture- The Far Side – (“That’s a Hell of Birthmark Fred!”) Poem/Limerick – The Man From Nantucket The A…AB joke/pun. Favorite Flower- Rhododendron Roses Favorite Color- Blondes (or maybe Blue… but Blondes) Favorite Sayings- Oh Balls! Where do we begin? So many sayings that we can't possibly remember them all. Please post on his wall more that are stuck in your memory about Fred. He had so many and most of them were inappropriate... would you expect anything else? LOL! 4’s Whores and 1 Eyed Jacks! 8, Skate, and Donate! See ya brown! You ever pooped out corn you never ate! You can go out on knobs! The popes nose! Slicker than a school marm’s leg! It’s all a steer can do! Colder than a witches tit! It’s raining like a cow pissing on a hot rock! Dadgummit! Good Enough for the Girls I go With! Pets- Zach Jesse Ashes Jackie Tweeters Favorite Song- Jim Croce The Hollies Bobby Darin John Fogerty Creedence Clearwater Revival Burton Cummings Fleetwood Mac Roy Orbison Shania Tawin Travis Tritt Songs – Charlotte the Harlot and K-K-K Katy

The family of Frederick O. Ziemke created this Life Tributes page to make it easy to share your memories.

Words that describe this life-
Fred had many words to describe...