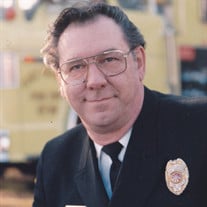 Gary Leigh Wernet age 75, passed away on June 10, 2018. Gary called Kitsap County home for most of his life. He was born in Mason City, Iowa May 30, 1943 to Leonard and Leona Wernet. Gary moved his young family from Iowa to Washington in 1967. He worked for Boeing until starting his career in public service as a Patrol Officer for the Seattle Police Department in 1968. He continued his Law Enforcement career as a Deputy with the Kitsap County Sheriff’s Department and as the Police Chief at the Klallam Nation Reservation until 1979. After a distinguished period in Law Enforcement, Gary changed careers and was hired by the Port Orchard Fire Department where he served as the Fire Marshall and Assistant Chief. He later retired as a Battalion Chief from South Kitsap Fire & Rescue in 2005. Gary spent 37 plus years serving the community in both Law Enforcement and the Fire Service. During that time, he was also very involved in other community activities. He was a First Aid and CPR instructor, instructing over 5000 people in life saving techniques. Gary also started the Port Orchard ‘Safety Fair’ and ‘Shop with a Firefighter’ program. He was a proud father and mentor to many young firefighters. He also enjoyed working on cars and always having a Mopar or two around the house. He was an avid gun collector, enjoyed Elvis Presley and Johnny Cash music, and after retirement, spent most of his time going to garage sales and auctions collecting western memorabilia. Gary is survived by his brothers Don and Jim, his sister Marlys, his sons Mike and Todd and daughter Mardell. He also had numerous step children, grandchildren and great grandchildren. A Memorial Service and Celebration of Life will be held July 19, 2018 at 2pm, at Rill Chapel in Port Orchard. In honor of Gary’s ongoing commitment to helping others, in lieu of flowers, please donate to a charity of your choice. A tribute wall is available at www.rill.com

Gary Leigh Wernet age 75, passed away on June 10, 2018. Gary called Kitsap County home for most of his life. He was born in Mason City, Iowa May 30, 1943 to Leonard and Leona Wernet. Gary moved his young family from Iowa to Washington in 1967.... View Obituary & Service Information

The family of Gary Leigh Wernet created this Life Tributes page to make it easy to share your memories.