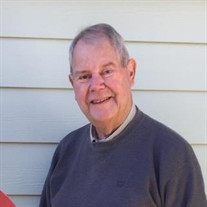 The Reverend George William Larson was born in Volga, South Dakota on February 2, 1941 to Earl and Marie Larson. He was baptized at Sinai Lutheran Church. George died in his home and into the promise of Everlasting Life at the age of seventy-seven, on Tuesday, October 23, 2018 surrounded by his family and the love of God. George moved from South Dakota with his family to Anacortes, WA in 1951. After graduating from Anacortes High School, George attended the Lutheran Bible Institute in Seattle, WA and then subsequently Pacific Lutheran University in Tacoma, WA. While attending LBI, he met the love of his life, Norma Jean Stenersen. As an upper-classman at PLU, George married “his bride,” on August 18, 1963. Following his graduation from PLU in May of 1965, George answered God’s call to enter seminary, and together with Norma, moved to St. Paul, MN and began his post graduate theological education at Luther Seminary. Not long after the move to Minnesota, the family grew with four children, Steve, Elizabeth, Eric, and Sonja . Upon graduation from seminary, George, was called to the yoked parishes of Trondhjem, Zion and Volin Lutheran Churches in South Dakota for 3 years. George’s second call to ministry moved his family to Mitchell, South Dakota where he served First Lutheran Church for over seven years. During his time at First Lutheran, George’s passion for Native American Ministries blossomed, as well as, his heart for evangelical outreach and mission development. Again, following God’s call for his life, George and his family moved to Puyallup, WA. There George served as the Mission Developer and Founding Pastor of Celebration Lutheran Church for 10 years. Deeply inspired by sharing God’s love with unchurched populations in the Pacific Northwest; George was then called as a Mission Developer to South Kitsap County, WA. On Christmas Eve 1991, George began building the foundation for Spirit of Life Lutheran Church, which he shepherded, served and retired from after 15 years. While George’s entire ministry was devoted to growing God’s church; his passion was encouraging others not to “just attend church,” but to “actually TAKE church” wherever they went in their daily lives. Not only did George preach this idea, he practiced it in every aspect of his faith in life. The evidence of George’s commitment to a public faith left its mark on each community he served. Notably, George began Good Friday Interdenominational Community Crosswalks in the communities of Puyallup and Port Orchard, which continue to this day, as well as, the practice of prayer vigils at sites of violence in Kitsap County. George’s passion for the wellbeing of children and youth extended far beyond the walls of the congregations he served. Most recently, he was instrumental in the creation of the South Kitsap High School Rowing Team. Lastly, George’s commitment to justice was seen in all aspects of his ministry and life. In his retirement, he served as an advocate and leader of the Southwestern Washington Synod of the ELCA’s Native American Task Force. George left a lasting impact on all the people and communities he touched. He was preceded in death by his parents and daughter Elizabeth. He is survived by his wife Norma, brother Stephen and wife Nan, sister Margaret and husband Dave Hood, sons Steven and Eric and daughter Sonja, son-in-law Dredrick Irving, five grandchildren Asia, Kyrie and London Irving, Emily and Chloe Larson one great granddaughter Azurie Irving and many nieces and nephews. George’s legacy is seen in many places and faces of those he served. The family has asked that any memorials be given in George’s name to one of his focused organizations. Luther Seminary, Pacific Lutheran University (Go Lutes!), or the Southwestern Washington Synod Native American Task Force.

The Reverend George William Larson was born in Volga, South Dakota on February 2, 1941 to Earl and Marie Larson. He was baptized at Sinai Lutheran Church. George died in his home and into the promise of Everlasting Life at the age of seventy-seven,... View Obituary & Service Information

The family of George William Larson created this Life Tributes page to make it easy to share your memories.