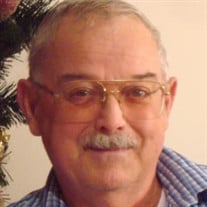 Gerald Mark Sebree Sr. affectionately known as Jerr or Grampa Jerr was born in Buffalo Wy, to Glenn P. and Venus F. (Ullery) Sebree on November 28th, 1939, 1 of 6 children. After high school, he enlisted in the United States Army, and worked as a mechanic in the motor pool on various types of vehicles, at duty stations all over the world. He retired from the US Army in 1978 at the rank of Sergeant First Class, E7 out of Fort Hood Texas after more than 20 years of active duty and serving 1 tour in Korea and 2 tours in Vietnam. Jerry moved to the Puget sound area in the 1970’s. He began his second career at Federal Way School District as a Mechanic for more than 20 years in the Bus Garage. He kept those buses and vehicles safely on the road all those years doing what he loved. After retiring for the second time, he continued with his intense passion of ‘tinkering’. He just loved working with tools, on wood or scaled model steam trains, and whatever else he found to tinker with. One of his favorites sayings was ‘don’t throw that away’ meaning that he would find a use for it later. He would collect wood of all kinds, shapes, and sizes, as well other things he saw as potential art. Jerry always took extra caution and measures when it came to building things or just being safe. Whatever he decided to build it was built like a tank. He never left a tie down strap unused by utilizing every single tie down strap he had, whether it was for a small simple load in the back of the truck or a large load in the trailer. There were little things he would do, such as tell co-workers to ‘have a nice weekend’ when it was only Wednesday or tell you ‘Merry Christmas’ or ‘Happy Birthday’ just because. He would always answer the phone with ‘Ya-ya’. It was so funny. He loved to read almost as much as he loved to talk. He would talk to himself quite a lot, whether at the tv, while reading the paper, or chatting up folks in the store. He liked guns, and he was a huge fan of any football, and obviously the Seahawks. Other things he loved were the outdoors and camping. He loved going on trips in the motorhome to Ocean Shores, the Mountains of Utah, or the dunes of Oregon, riding his quad (ATV) whenever he could. His adventuring started when he was 14 years old and decided one day to pack up all he could, get on his motorcycle and travel all over the country. If he thought he could turn one of his wild ideas into a bit of an adventure, he would try! He is survived by his wife Linda P. Nielson-Sebree, sisters Dorothy Weber (Rankin), Carman Sebree-Hammons, brother Lawrence (Larry-Butch) Sebree, son Mark Sebree Jr., daughter Cheryl Sebree- Zirkel, and stepchildren, John Ernst, Jeanne Ernst-Williams, and Chad Maddux. He was blessed with 10 grandchildren and 11 great-grandchildren. Jerry was a very trustworthy man, a great husband, father, grandpa, and great grandpa.

The family of Gerald Mark Sebree Sr. created this Life Tributes page to make it easy to share your memories.