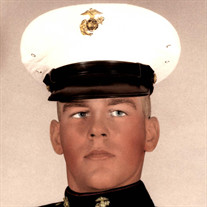 In Loving Memory of Glenn E. Bressler Born, January 22nd, 1941 Died, February 16th, 2019 Glenn Bressler, aged 78, passed away peacefully in his sleep Feb 16th, 2019 in Bremerton Wa. Born Jan 22nd, 1941 in Seattle, Glenn grew up in the Rainer Valley and Seattle area. He enjoyed playing baseball with neighborhood friends and often pitched. He was an avid swimmer as a kid and is well remembered by siblings for his strong swimming ability and fun times enjoyed at Alki Beach. He once swam to safety after being pulled out in a rip tide, and again later in life swimming to an island after a boat capsizing accident in the Puget Sound. He served honorably in the United States Marines spending time in various duty stations around the South Pacific. Guam and Japan were favorite spots and he took up snorkeling and scuba diving and learned to speak some Japanese. Completing his duty tour he then turned his energy to education. He obtained a Bachelor of Science in Business from the University of Washington and later a second degree in Maritime Engineering. Glenn rose to the rank of Chief Engineer of the Washington State Ferry System where he worked for 23 years before retirement. He and wife Joan thoroughly enjoyed times at their Colby Beach home; swimming, and walking with their many dogs. They also enjoyed traveling to Mexico in their R.V. and cruising in their Mustang with the top down. In the later years, Glenn enjoyed a fun cruise around the countryside, going to lunch for his favorite cup of clam chowder and to movies and his weekly massages, or reading a good book while enjoying his view of the water. Glenn was a sweet and caring soul with a endearing smile and wry sense of humor who brought a smile to those who knew him. He is preceded in death by his parents, his beloved wife Joan, his brother Frank, and his sister Rosemary. His beloved dogs, Maggie, Molly, Baby, and Matty. He is survived by a step daughter, Jennifer, his sisters Cecilia, Virginia, and Margaret. And long time companion Sherry. His final resting place will be with his wife Joan in The Puget Sound, the waters he loved and swam so well. Memories and Condolences may be shared here on line, or cards may be sent to Rill Funeral Home in Port Orchard, WA. In lieu of flowers, a donation of your time or funds to your local Humane Society is what Glenn would have wanted. Please give him a fond salute and thought the next time you ride a ferry on the Puget Sound. May he Rest In Peace.

The family of Glenn E. Bressler created this Life Tributes page to make it easy to share your memories.