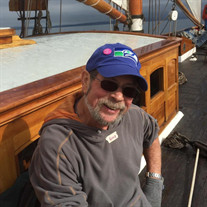 It is with great sadness that the family of Gregory Ned Jarczynski, age 68, of Port Orchard, Washington, announce his passing on Saturday, March 28, 2020 at home with his loving wife. Greg died of cerebrovascular disease. As friends and family are aware, Greg battled health challenges in recent years which included two strokes in 2018 and a cancer diagnosis of acute myeloid Leukemia in September 2018 (remission achieved in January 2019 and maintained). As Greg tried to recover from these conditions, his vascular dementia progressed in 2019-2020. Greg was the beloved husband and best friend to his spouse, Claire Elizabeth Fox, loving father to son Gregg William Jarczynski and loving father in law to daughter-in-law Kristina Jarczynski. Greg was the loving son of Floyd and Valeria Jarczynski, who predeceased him. Greg was born in Bay City, Michigan and grew up on his family's dairy farm near Pinconning, Michigan. Greg graduated from Standish High School in 1969. Greg joined the Army reserves in 1969 and continued his service for five years. Greg loved to race motorcycles in wooded areas of Michigan. He wiped out more than once and showed scars from his daredevil hobby. Like his two older brothers, Greg decided not to stay on the family farm. In high school and college classes, Greg sought practical skills and training that lead him to a career as a steel fitter. At one time, he built large cranes for American Hoist & Derrick before that company, like others, moved manufacturing overseas. In time, Greg earned journeyman status in his steel fitting trade. Greg married Cindy Stanton in 1973 with son Gregg born in December 1977 in Michigan. The couple divorced in 1980 in Michigan. From an early age, Greg took his son camping and boating - or both when they canoe camped. Greg also had fond memories of riding on his motorcycle with his young son. After Gregg moved with his mother to Washington state, he continued to spend summers in Michigan with Greg. After over 25 years working in steel in Michigan, Greg came to Washington state to continue to be close to his son as young Gregg graduated high school and made plans to attend college in Washington state. After a stint as a federal contractor for Pacific Ship Repair & Fabrication, Inc., Greg was hired by Puget Sound Naval Shipyard as a Shop 11 Ship Fitter in June 1997. Through a mutual friend, Greg and Claire were introduced at the former Michael G's Bar & Grill in Port Orchard in 1996. They went out for Chinese food on their first date and then returned to Michael G's to hear music. They quickly found that they both loved to dance and had shared values. Greg married Claire on August 30, 1997 in Port Orchard and was happily married for over 23 years. Greg retired from PSNS in June 2014 after seventeen years of service. Greg grew up fishing, hunting and camping in the woods and farmlands of Michigan - activities he loved. In Washington, when he was more able-bodied, Greg enjoyed camping in his pop up camper and trout fishing in his 17 foot Fisher boat. Greg enjoyed time spent at Lake Cushman in the woods and on the water. Greg also enjoyed going to Pacific Beach or La Push, Washington and walking on the beach by the Pacific ocean. Greg loved canines and had dogs most of his life. After retirement, Greg and Claire adopted a shelter dog, "Rowdy", in 2016 from the Tacoma and Pierce County Humane Society. This Australian Cattle Dog became Greg's constant companion. As Greg's health challenges grew and he spent more time at home and in bed, Rowdy proved all the more devoted and continued to be at Greg's side night and day. Greg left a legacy of loving the out of doors in his adopted state and loving his family, friends and their pets. For many years, Greg maintained bird feeders in his back yard. He enjoyed watching birds at a feeder placed outside his bedroom window in the last month. Greg is also survived by his elder brother, Donald Jarczynski, and sister in law, Sharon Jarczynski, of Pinconning, Michigan, and three nieces, Molly (Ryan) Huber, Erin (Bill) Janetsky and Megan (Chris) Regan and 13 grand nieces and nephews, all residing in Michigan. Greg's other elder brother, Ronald (Rita) Jarczynski, predeceased him, leaving Greg with two surviving nephews, Brian and Jeremy Jarczynski and one niece, Heather (Clark) Feller, as well as a number of grand nieces and nephews. A Celebration of Life will be held at a later date at Rill Chapel. Greg has been cremated and will be interned at Sunset Lane Memorial Park following his celebration of life. In lieu of flowers, please send donations to the Tacoma and Pierce County Humane Society at www.thehumanesociety.org or the Kitsap Humane Society at www.kitsap-humane.org

It is with great sadness that the family of Gregory Ned Jarczynski, age 68, of Port Orchard, Washington, announce his passing on Saturday, March 28, 2020 at home with his loving wife. Greg died of cerebrovascular disease. As friends and family... View Obituary & Service Information

The family of Gregory Ned Jarczynski created this Life Tributes page to make it easy to share your memories.

It is with great sadness that the family of Gregory Ned Jarczynski,...