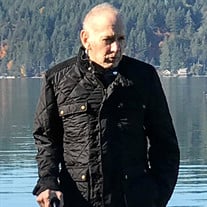 Gustav Swenson, 81, died 22nd July 2019 at his family’s home in Belfair, Washington from natural causes. His funeral service will be held this Friday at Tahoma National Cemetery, in Kent followed by Columbarium placement. Mr. Swenson was born on 27th September 1937 in Jasper, Minnesota to Vera and Gustav Swenson. He served in the US Navy during the Vietnam War which included service onboard Minesweeping Boat Thirty-one conducting minesweeping patrols. After leaving the Navy he worked in the Bremerton Naval Shipyard as a Small Craft Operator, until he retired (He always loved being on the water). He married Donna Shoen and they raised one son, Gustav Swenson III. Mr. Swenson moved to Allyn, Washington after the death of his wife in 1993 where he lived until the time of his death. He loved fishing, playing cards, spending time with friends and loved ones. His family paid this tribute to him, ‘Gustav was one of the kindest people you could ever meet, he opened his heart and his home to many over the years. He was a beloved husband, father and friend’ He is survived by his Son and 2 grandchildren, Gustav Swenson IV and Tayler Skrivanich. “Fair winds and following seas” When someone dies, a cloud turns into an angel, and flies up to tell God to put another flower on a pillow. A bird gives the message back to the world and sings a silent prayer that makes the rain cry. People may disappear, but they never really go away. Their spirits are in heaven. They put the sun to bed, wake up the grass, and spin the earth in circles. Sometimes you can see them dancing in a cloud during the daytime, when they're supposed to be sleeping. They paint the rainbows and the sunsets, they make waves splash and tug at the tide. They toss shooting stars and listen to our wishes. And when they sing wind songs, they whisper to us, “Please, don't miss me too much. The view is nice up here… and I'm doing just fine”. Author: Unknown

The family of Gustav William Swenson Jr created this Life Tributes page to make it easy to share your memories.