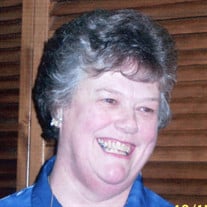 Harriet Louise Norwood died August 11, 2017 after a lengthy illness. She was the oldest daughter of Harriet and Russell Root of Port Orchard. She was born and lived all her life in South Kitsap. Harriet graduated from South Kitsap High School in 1957. She attended Olympic College for two years. Harriet volunteered 18 years in the South Kitsap Schools in the classrooms, attendance office, and parent committees; including the report card revision committee. Harriet was very active with many 4-H projects since the age of 9; receiving many outstanding awards including a trip to National 4-H Club Congress in Chicago. She exhibited or attended the Kitsap County Fair each year until 2009 only missing twice. She was not only a 4-H member and Leader but was a named advisor to dispense bequest funds to the County 4-H Camp Projects. Harriet met her husband, Asa Lee (Sonny) Norwood, while grooming her dairy cow at the Kitsap County Fair located at the present day Olympic College Campus Site. They met on August 23, 1956 and married three years later on the same date, August 23, 1959. All of Harriet’s life has been actively volunteering in her neighborhood, County, District, State, and National Clubs and Organizations. She was very active in the South Kitsap Federated Woman’s Club where she held many offices or lead committee positions for community service projects. Harriet has been honored eighteen or more times for her outstanding work and efforts to have a better life-style or improved community conditions. She was Port Orchard Chamber of Commerce first Woman-of-the-year, honored by Washington State School Superintendents for service to the schools, and Washington State’s Arbor Day Recipient of 1982 for her role in beautification to the “new” South Kitsap High School Campus. She helped establish and furnish the first Ronald McDonald House in Seattle for families with children with catastrophic diseases. Harriet did this while caring for and supporting her own child, Jeanne Marie Norwood, who was undergoing terminal care at Children’s Hospital. Harriet worked with the University of Washington and helped conduct the largest door-to-door survey in South Kitsap to name and create better conditions for the total community. Harriet was preceded in death by her Mother, Father, ½ Brother-Laver Root, Daughter-Jeanne Marie, and Grandson Kyle Steven Cole. She leaves behind her husband of 57 years Asa Lee (Sonny) Norwood, Daughter-Melinda “Faye” Cole and husband Steve Cole, Granddaughters- Kayla Eldridge and husband Dylan, and twins Evona and Emily Cole, Sister Liz Wilkins and nieces and nephews. There will be a celebration of life held at the family home on September 3rd from 2 PM to 6 PM.

Harriet Louise Norwood died August 11, 2017 after a lengthy illness. She was the oldest daughter of Harriet and Russell Root of Port Orchard. She was born and lived all her life in South Kitsap. Harriet graduated from South Kitsap High... View Obituary & Service Information

The family of Harriet Norwood created this Life Tributes page to make it easy to share your memories.