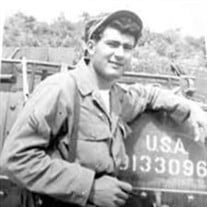 Harry Joseph Land died peacefully on March 22, 2022 after a long struggle with Alzheimer's disease. He was born in Clear Lake, Washington on May 13, 1930, the first child of Hubert Land and Dolly (nee Gay) Land. He grew up in Clear Lake and attended Sedro Woolley High School, graduating in 1948. In March of 1952, Harry was drafted, and he spent part of 1952 and all of 1953 in Korea. He never talked about his time in Korea, and it was only recently that his family learned that he had been awarded two bronze stars and a good conduct medal for his service there. After being discharged from the military, Harry returned to Clear Lake and soon began his decades long career in the timber industry. He worked in the woods throughout the region, serving as a fire lookout in Washington and parts of Oregon, to mapping timber holdings in British Columbia. He eventually settled at Georgia Pacific. Working out of their yard in Clear Lake, Harry and his crew built and maintained logging roads all over Skagit County. This work reinforced his love of nature and being outdoors. In March of 1955, Harry married June Pitman, and together they raised their four children on their farm just outside Clear Lake on the Old Dat Creek Road. The "A" frame barn that he built with the help of friends and his Pitman brothers-in-law is still standing on that property today! Harry had a life-long love of horses, starting with "horse logging," on his grandfather, "Papa" Joe Gay's homestead in Clear Lake when he was 12 years old, and progressing to hunting, packing, and camping on horseback out of Winthrop, Washington after his retirement from GP. He loved talking with other, "horse people," about what worked and what didn't, always willing to share information and absorb knowledge from others. He definitely believed the old adage that there is something about the outside of a horse that is good for the inside of a man. In 1998, at a St. Patrick's day barbeque, Harry met Coralyn Smith. They formed a friendship and eventually married. They were together until his death. Harry is survived by his wife, Coralyn; daughters, Viola Knutzen, Barbara Douglas, and Gail Land; son Ken Land and his wife Linda; step-daughters, Bernice Apsens and husband Jim Busek, Denise Root and husband Dan, and Sheila Anderson; sisters, Norma Harold and her husband Scott, Linda Rimmer and husband Bill. He is also survived and much loved by numerous grandchildren, great-grandchildren, nieces, and nephews! Harry was never much for crowds or, "fussing about," and had early on asked that there be no funeral service. In keeping with his love of the outdoors, he asked that his ashes be scattered somewhere in the woods of Skagit County. Harry's family ask in lieu of cards or flowers, please make a donation in his name to the Alzheimer's Association, so that their work can someday end that horrible disease.

Harry Joseph Land died peacefully on March 22, 2022 after a long struggle with Alzheimer's disease. He was born in Clear Lake, Washington on May 13, 1930, the first child of Hubert Land and Dolly (nee Gay) Land. He grew up in Clear Lake and... View Obituary & Service Information

The family of Harry Joseph Land created this Life Tributes page to make it easy to share your memories.