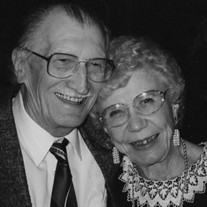 Hattie Valerie (Tylla) Stimac Hattie Stimac left her family to be with her Creator on January 11, 2018. She was born on January 9, 1922 in Clarissa, Minnesota to Thomas and Agnes Tylla, the youngest of six children and grew up in Chisholm, Minnesota, graduating from Chisholm High School. She met her future husband, Mike, at a dance and they danced their way through 67 years together. They married in 1944 and headed west to Alaska, but ended up in Port Orchard, Washington. They maintained rich family ties to Minnesota and visited there every two years through much of their life. In 1947 they bought a saw mill on the Old Belfair Hwy. The saw mill was later sold, but they stayed on the 13 acres and made it their Shangri-La, growing an abundance of fruits, vegetables and flowers and caring for the forest behind their home. Hattie took great joy in her garden and would show off her beautiful yard with pride. She was a wonderful water-color artist and loved canning and pickling, winemaking, mushrooming, berry picking, gathering oysters and digging for razor clams. She was always ready to welcome and feed anyone who showed up on her doorstep. Hattie also enjoyed hunting with her husband until one day when bullets whizzed a little too close, convincing her to confine her interest to harvesting some pheasants in the backyard. She loved to eat fish and would always forgive her son for being late for dinner if he brought home a salmon or trout. On her 94th birthday she returned to the Washington coast and proudly dug her last razor clam. Hattie assembled binoculars for the Navy during WWII. Later she worked as a cook and as a seamstress in a dress shop, returning to PSNS Supply to finish her career in 1975. Mike and Hattie danced 2-3 times a week into their 90s and their favorite tune was “In the Mood” by Glen Miller. They were active in starting the Bear Creek Community Club, danced at the Eagles their whole lives, and later enjoyed golfing, and the Belfair Senior Center. One of Hattie’s favorite things in these last years was to bring home-baked goodies to her friends at the Senior Center. After Mike died in 2011 Hattie also volunteered at The Pantry in Belfair and immensely enjoyed new friends she met there. In the end her family suspects Hattie’s heart broke with the passing of her daughter, Carol, just one month ago. Mom was a central part of our lives and will be greatly missed by her son, Mike (Jann), grandchildren, Frank Riedle, Sarah (Scott) Kaelberer, Katie (Jonathan) Mendelsohn, Shea Stimac, John (Emily) Stimac, Thomas (Shawna) Stimac and seven great grandchildren. A celebration of her life will be held on January 29th at 11:00 a.m. at Prince of Peace Catholic Church (1171 NE Sand Hill Rd., Belfair WA 98528). Remembrances and donations can be sent to The Pantry in Belfair.

Hattie Valerie (Tylla) Stimac Hattie Stimac left her family to be with her Creator on January 11, 2018. She was born on January 9, 1922 in Clarissa, Minnesota to Thomas and Agnes Tylla, the youngest of six children and grew up in Chisholm,... View Obituary & Service Information

The family of Hattie Valerie Stimac created this Life Tributes page to make it easy to share your memories.