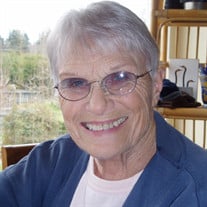 Naomi came into this world on January 3rd, 1924 in Stockton, California. Named Hazel Naomi, her uncle promptly announced he would NEVER call her Hazel. From that moment on she was called by her middle name of Naomi, pronounced with an “A” on the end, make no mistake! In 1939 the family moved back to Port Orchard, where Naomi graduated from South Kitsap High School and lived out her life. Naomi was widowed in 1961 when her husband Stan, the love of her life, died suddenly. She never remarried, saying, “I had the best man in the world, why would I ever take second best?” Naomi taught cosmetology at Cinderella Beauty School in Bremerton, buying the business in 1966, when she became somewhat of a trailblazer as a single mom and businesswoman, a rarity in the 1960s. She had many interests. Her green thumb was well known, and her Bonzai specimens were delightful. Her gardens, deck and house were always resplendent with blooms nearly year-round. She had a special talent for growing lilies, and the arrangements she made with them were extraordinary. She painted many canvases when she took an art correspondence course in the late 1960s. She enjoyed reading recipes and cooking, and often offered her family dishes before they ever became trendy. She was also known for her rum-soaked fruitcake during the holidays, a fruitcake that people actually liked! She could hunt for agates tirelessly on any beach or riverbed and passed that love on to other family members. Beach fires and the 4th of July were decades-long traditions on Naomi’s beach in Harper. Generations came to “Nana’s” beach to celebrate. The parties were sometimes quiet, and sometimes they were wild, and they were enjoyed by all. She travelled with family to Hawaii, Europe, Hong Kong, Thailand, and Sri Lanka. From the latter she brought back beautiful batiks and introduced us to South Asian cuisine, which we have embraced. Naomi’s hands were rarely idle until arthritis prevented them from accommodating her creative nature. In her later years she was an avid reader, and a true-blue Mariner’s fan, (she knew all the players names!) Her absence at “Wine Time” will be felt by her beloved niece and nephew and neighbors Debbie and John Clark. Known to her relatives and her many “Grands” as Nana and Amo, she was affectionately described as “Feisty,” and “a Baddass.” Naomi was not shy about speaking her mind, and her candor was appreciated by those who loved her. Those who she had to live her life without were her parents Selah and Howard Lammers, her father Bernie Wilkinson, her husband Stan, little sister Donna Fae Peterson, and at 95 years old, most of her friends and many family members. Those who now have to live without her: Her daughter and son-in-law Laurel and Bill Johnson, their children Nick (Jessica), and Desiree Houston (Ryan). Daughters Nancy McAbee (Mike), and Diane Hart, sister Joyce Grinnell, 5 more grandchildren, seven great-grandchildren and many nieces, nephews, and cousins whom she loved fiercely. She will be missed.

Naomi came into this world on January 3rd, 1924 in Stockton, California. Named Hazel Naomi, her uncle promptly announced he would NEVER call her Hazel. From that moment on she was called by her middle name of Naomi, pronounced with an &#8220;A&#8221;... View Obituary & Service Information

The family of Hazel Naomi Wilkins created this Life Tributes page to make it easy to share your memories.