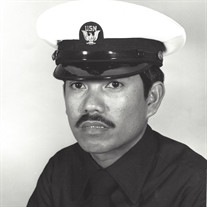 Herminio “Hermie” Mercado Linsao, 70, of Port Orchard, passed away on Sunday, July 14, 2019, at his home. He was born on March 29, 1949, in Santa Cruz-Manila, Philippines, to Francisco and Romana Linsao. He joined the US Navy in May 1970 and retired in June 1990. He was a Vietnam War veteran, serving onboard the USS Enterprise (1970-1974). He met his wife, Alice Mirador, in Bremerton while attending a Filipino-American function and was married on June 22, 1974. They celebrated their 45th wedding anniversary about 3 weeks prior to his passing. Together, Hermie and Alice raised 5 children and have lived in Port Orchard since 1986. While serving in the Navy, Hermie, along with his family were stationed at various naval locations, such as Naval Station Puget Sound Bremerton (Washington), Naval Air Station Moffett Field (Mountain View, CA), Naval Air Station Whidbey Island (Oak Harbor, WA), USS Shreveport (LPD12) (Norfolk, VA), USS Sphinx (ARL24) (Panama), and finally Naval Station Puget Sound Seattle (Washington) where he retired. After retiring from the Navy, he continued to work in food service and later as a custodian. He last worked for the City of Tacoma Public Library for over 10 years before his cancer diagnosis. He led a simple life, enjoying pastimes such as fishing, crabbing, clamming, squid jigging, and oyster harvesting. He also was an avid gardener, even starting a small self-employed business doing yard work, both residential and commercial. He was interested in working home projects—repairing and remodeling things around his home. He was also very active in his children’s sports as they were growing up and enjoyed attending Seattle Mariners and Seattle Seahawks games occasionally. He often could be found assisting his wife by setting up/breaking down for various farmers’ market and craft shows/festivals. But most of all, he enjoyed being in the company of his children and extended family/friends. His family wishes to express the following: Although your time with us was sadly cut short, you will always continue to live a never-ending life in our hearts. We will miss your presence, enjoyment and pleasure in partaking in the simple things that life had to offer, and your constant need to always look out for your family’s welfare and safety. We couldn’t have asked for a more loving, hard working, respected, and perfect husband, father, and grandfather. Hermie is survived by his loving wife, Alice, children Roman (Karen), Dario, Dino (Mary), Alicia, Nicholas, and granddaughter, Audriana. Hermie was also predeceased by his daughter-in-law Julie. Preceding him in death was his father, Francisco, Sr. Surviving family members include his mother, Romana, and siblings Lodi (Linda), Juanito (Nita), Renato (Geraldine), Manuel (Marissa), Francisco, Jr., Phillip (Gemma), Irma (Fernando), Marilou, Nino (Maria), and numerous nieces and nephews. The Linsao family would like to express a special note of thanks to all who cared for him during his time of illness—the doctors and nurses of Harrison Health Partners out of Poulsbo, his doctors at the Bremerton Naval Hospital, and Chi Franciscan Hospice Team. He fought bravely in his battle for life and he did it with nothing but love and support from all.

The family of Herminio Mercado Linsao created this Life Tributes page to make it easy to share your memories.