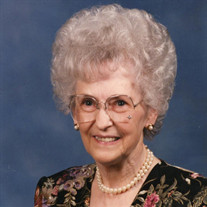 Ileana Harriett Miller was born in Huston, Idaho on February 28, 1929, the second of two children, both girls to Archie and Thelma (Jones) Miller. She was named after Romanian princess Ileana. Though our Ileana was raised on a farm, she yet... View Obituary & Service Information

The family of Ileana Harriett Sooter created this Life Tributes page to make it easy to share your memories.

Ileana Harriett Miller was born in Huston, Idaho on February...