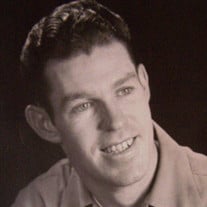 McGee, Jack H. ~ Of Port Orchard, WA age 92 died Sunday June 17, Father's Day 2018 at Harrison Memorial Hospital Bremerton. Jack was born at home in Flint Michigan April 19, 1926, the son or Arile and Doris (nee Hackett) McGee . Jack lived in Flint and on a beautiful farm in Linden MI , retiring in Port Orchard WA. Jack had a passion for baseball with the goal of playing in the pros, but answered the higher call to serve his country and at age 17 enlisted in the US Army 115th Parachute Infantry Division , US 13th Airborne Division from 1943-1945. Jack parachuted into France during the Battle of The Bulge after Normandy and was a war hero in the VJ parade in the streets of New York City when the war in Europe ended. After the war Jack enlisted in the Michigan National Guard earning rank of Master Sergeant. With a sense of adventure, fondness for horses and the love of a good journey, during 1980s -90's he and his wife Jean who were married in 1948 were members of Michigan Trail Riders Association taking on the 220 mile endeavor of the Michigan Shore -To- Shore trail along with years of group rides though the state. He also had a passion for coin collecting and baseball memorabilia and a joy for reading ~ one he shared with his daughter Jan. Travel would also take him to frequent the tropical islands of Hawaii and Cruise the Panama Canal and the icy waters of Alaska . Mr. McGee was employed by the Flint Michigan Police Department retiring as Detective Sergeant with 25 years of service. In 2005 Jack lost his wife Jean who sadly passing away. At age 81, Jack found love again and is survived by his cherished and loved wife, Rayma Craven (nee Johnson) whom he married in 2007. Jack is also survived by 1 son Larry and wife MaryEllen of Urmo South Carolina, 2 daughters Janet and husband Richard Williams of Port Orchard WA and Vicki “Kai” MarQuis and husband Jeff Smith of Index WA. Grandchildren, Aaron, Eric, Megan McGee and Trevor & Emilia Nellenbach , Great grandchildren Isabella, Maggie, Liam, Piper and Delaney , many nieces and nephews. Brother Melvin with wife Rita . Step daughters Bonnie , DeAnne and Joyce . He was preceded in death by his Beloved wife of 54 years Viola Jean (nee Stewart), daughter Linda Ann, brothers Robert “Bob”, Arlie Jr. and sister Deloris. Jack will be remembered for his his sense of humor, passion for life's adventures and the love and dedication he had for his family. Jack epitomizes the character of an era that is fading into history, where simple humility and basic decency were the foundation of our society, cultural mores and our laws. There are very few guys like Jack McGee left in our world. He will be badly missed.

The family of Jack H. McGee created this Life Tributes page to make it easy to share your memories.