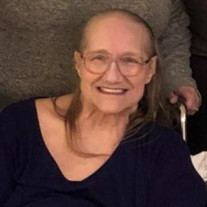 Jacqueline L Thompson, 79, passed on August 31, 2021. She was born to James T Hull, Sr and Violet Hull in Port Orchard, Washington on April 30, 1942. She was raised in Port Orchard with her sisters Violet, Imogene, Carolee, Marilyn, Crystal and brother Jim. She graduated from South Kitsap High school in 1960. She married Jerry L Thompson on Good Friday 1968. They moved with his USN career, returning to live in Port Orchard. Together they raised 4 children: Robert, Paula (Mike), James, and Janet (Don) Gibson. They were blessed by 24 grandchildren: Marc (Maya), Josh, Dustin (Amye), Jason (Sara), Taylor (Alex), Shelby (Carrie), Aaron (Becka), Tanner (Hannah), Noah, AJ, Destiny, Katelynn, Matthew, Zach, Skylar, Rowan, and Morgan, 7 great grandchildren: Hailey, Sam, Addy, Karlie, Rowan, Malachi, and Miles, and Carly Carbone her adopted girl. She is survived by her sisters Marilyn and Crystal along with numerous nieces and nephews. She was preceded in death by Jerry and their grandson Matthew Thompson. Jackie devoted her life to being a wife and mother, her most favorite job was being Grandma/Grammy to the next generations of the Thompson/Gibson tribe. Due to unforeseeable circumstances the service planned for Saturday the 25th has to be postponed. We will update this site when it is rescheduled. In lieu of flowers, Jackie would want donations to be made to the activity department of the Washington Veterans home at Retsil 1141 Beach Drive E, Port Orchard WA.

The family of Jacqueline Lois Thompson created this Life Tributes page to make it easy to share your memories.