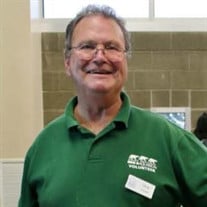 James Richard Conroy– A Unique and Beautiful Life A boiler plate obituary does not suit James Richard Conroy, who was affectionately called Dick by his friends and colleagues. Dick is not about his list of accomplishments or clubs he belonged to or those who are surviving him. Dick led an unconventional life and will be remembered by the way he made people feel in his presence vs. how much paper he sold for the various paper companies. Dick was about connection, finding a common ground, a place to share our similarities vs. our differences. He was a philosopher and liked long, deep conversations. He also joked that “I have a mind full of little-unknown facts that nobody gives a [bleep] about.” He pulled them out like a parlor trick at parties. And Dick loved a good party and a good many bottles of white wine. His wicked sense of humor and laughter could rattle a room. There are many “Dickisms.” Every year he hosted traditional family Thanksgiving at his house in Seattle for those who were away from family. Dick was single and had no children, so friends were his family. Dick would prepare for days to entertain around 20 folks. Fabulous food and good spirits flowed for about 3 hours. We were all just getting started when Dick would announce, “Who wants coffee before they have to leave?” He was exhausted after days of prep, but we laughed and stayed anyway. He also imparted important party wisdom: “Serve the finer wines first to impress the guests, but quickly move to the cheap wines when they will no longer care.” Nature was Dick’s happy place. His favorite companion was a German Shepherd named Baer. He was loyal and smart – just like Dick. They went off for days at a time backpacking and sleeping under the stars, miles away from civilization in the Rocky Mountains of Colorado. Dick always talked fondly of these days. Dick’s professional life was in sales, but his real passion was animal behavior. If he could do it all again, and maybe he will, he would be an Ethologist – Animal Behaviorist. After retirement Dick served as a Docent for the Point Defiance Zoo and Aquarium in Tacoma for many years. He lit up sharing numerous stories of witnessing births, surgeries, and the discoveries from research. The zoo staff absolutely loved Dick and trusted him enough to get his assistance in many areas normally not attended to by a volunteer. Dick was humbled by this gesture. Dick’s life totem was the Great Blue Heron which he displayed in many forms in his house and on his beloved sailboat. Puget Sound was his playground where his totem soared proudly while Dick shared the magic of being under sail with many of his friends and family. Dick was young at heart. This can be an overused descriptor, but in Dick’s case it applies. Some of his closest friends were 20 plus years younger than he. He was a good listener and would serve out advice when asked and remain quiet when appropriate. A cradle Catholic, Dick had deep roots in his faith and was called to become a Benedictine Monk in his twenties. However, he discovered his calling was outside the walls of the monastery. He may have left the “building”, but the practices never left him. He celebrated Easter every year at St. Benedict’s Monastery in Snowmass, Colorado, to pray, observe silence, and to share the Eucharist with his brothers. And he was an active member of St. Gabriel’s parish in Port Orchard, especially the RCIA program. But the biggest gift Dick gave the world was his laughter and never meeting a stranger. He always found a way to connect and make a person feel better by being in his presence. Dick’s ashes will be planted on the sacred grounds of St. Benedict’s Monastery in Snowmass. A good ending to 86 years of a life well lived.

James Richard Conroy&#8211; A Unique and Beautiful Life A boiler plate obituary does not suit James Richard Conroy, who was affectionately called Dick by his friends and colleagues. Dick is not about his list of accomplishments or clubs he... View Obituary & Service Information

The family of James Richard Conroy created this Life Tributes page to make it easy to share your memories.