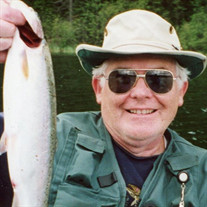 James ‘Jim’ Thomas Hasslinger died on June 10, 2018 at Harrison Medical Center in Bremerton, WA at 3:10pm. At 76 years of age, he died following the somewhat sudden onset of an, as of yet, unexplained illness. He was surrounded by family at the time of death. Jim was the second of three children born to Bernard Lawrence Hasslinger (deceased) and Bernadette Keefe Hasslinger (deceased) on February 4, 1942 in Minneapolis MN. With his siblings, John Bernard Hasslinger (deceased) and Paulette Hasslinger Deal, he assisted his parents in running the family hardware store serving a rural farming community around Rockford, MN. In his work at the hardware store, Jim gained knowledge and technical skills that he applied later in his career. He was also willing to give advice and assistance to friends and family in need of help with home maintenance. Jim attended high school and two years of college at St. John’s University in St. Cloud, MN. For a brief time, he entered Catholic seminary. He enlisted in the Army in 1964, where served as a fire control mechanic for a missile system. He was honorably discharged as a Sergeant (E-5) in 1970. While stationed in El Paso, TX, he met his wife of more than 50 years, Karen Van Doren. They married on December 22, 1966 and had two children, Heather Alene Hasslinger Stone (b. 1969) and Wendi Kay Hasslinger Goris (b. 1972). Jim graduated from the University of Minnesota with a Bachelor of Science degree in Engineering in 1969. He worked as a civil engineer in Minneapolis, MN, Springfield, IL, Seattle, WA, and Bremerton, WA. He worked on waste water management systems, hydro-electric power plants, and infrastructure projects pertaining to the planning of bridges and roads. In 2005, Jim retired from Parametrix, an engineering firm, in Bremerton, WA. Jim was adventurous and fun loving. There was nothing he loved more than visiting family. The Hasslingers would visit his cousins in Minnesota; his brother, John, sister-in-law, Annie, and niece and nephew, Mireya and John Jr. in California; his sister, Paulette, brother-in-law, Jim, and nieces and nephews, Vickie, Rosie, Jimmy, and Michael in Indiana, Illinois, Florida and Texas. In retirement, he and Karen made frequent road trips in their ‘Truck-House’ (the term for their RV coined by one their grandchildren) to visit family. They most often traveled to Spokane, WA to visit their daughter, Wendi, son-in-law, Nick, and grandchildren, Micah (22), Levi (18), and Marin (13). They took longer trips as well as to visit their daughter, Heather, son-in-law, Oliver, and grandchildren, Sophia (11) and Xavier (8) in Chicago, IL, Baltimore, MD, Dothan, AL and Richmond, VA. After they wore out the Truck-House, Jim rented accommodations in scenic locales for family get-togethers with Wendi’s and Heather’s families. To celebrate their 50th wedding anniversary, the family got together in Montana and visited Yellowstone Park. The week he died, the family had planned to gather at Granite Point Park outside of Spokane to celebrate the high school graduation of grandson, Levi Goris. Jim loved fishing and being outdoors. While raising their children, Jim and Karen took their daughters camping, canoeing, and fishing. When the girls moved away for college, he went on an annual fishing trip to Tuloon Lake in Canada with friends for a period of 10 plus years. He always dreamed of living on a lake stocked with trout. That dream was realized in 2003, when he and Karen moved to Mission Lake in Kitsap County where he lived the last 15 years of his life. He never missed an opening day of fishing season. Jim was a devout and active Catholic in every parish he was a member. While raising his family in Bellevue WA, he was a member of St. Madeline Sophie parish. There, he and Karen were involved with Marriage Encounter (ME) and developed lifelong relationships with other families in their ME group. He helped lead the Rite for Christian Initiation of Adults (RCIA), the program for adults exploring joining the Catholic Church. After moving to Kitsap County, he joined Prince of Peace parish in Belfair, WA. There, he continued his leadership in the RCIA program and joined the Knights of Columbus (KOC). He was an all-around volunteer for most parish activities. He was a lector, ran and repaired the AV system, served as the thurifer for parish funerals, prepared food and washed dishes for parish breakfasts, led a weekly bible study, and served as the KOC financial secretary for nine years. Jim was known for his sense of humor. For example, he said it was clear Jesus was a fisherman because his arms were always spread wide to show the size of fish he’d caught. When one of his cars had 99,999 miles on the odometer, Jim and his daughter, Wendi, stopped driving to push the car to the 100,000 mile point. On the Christmas before his daughter Heather’s wedding, he gave his son-in-law to be, Oliver, a gift. When the box was opened, inside was a plaster hand (symbolizing that he was giving his daughter’s hand in marriage). During his last week of life in the hospital, Jim was apologetic to others for his illness interfering with the plans for his grandson, Levi’s, graduation. He told his family and friends from Prince of Peace, “I love you so much.” He received last rites from his parish priest. His last words were “Father, Father, I love the Lord.” He shed one tear as he took his last breath. A funeral mass will be held at 12:00 pm, Saturday, June 16, 2018 at Prince of Peace Catholic Church - 1171 NE Sand Hill Rd, Belfair, WA 98528. There will be a Rosary at 11:30 am prior to the Mass. A reception will be held in the Parish Hall following services. In lieu of flowers, the family requests donations in memory of Jim Hasslinger to the Knights of Columbus, P.O. Box 2671 Belfair, WA 98528, or your favorite charity.

James &#8216;Jim&#8217; Thomas Hasslinger died on June 10, 2018 at Harrison Medical Center in Bremerton, WA at 3:10pm. At 76 years of age, he died following the somewhat sudden onset of an, as of yet, unexplained illness. He was surrounded by... View Obituary & Service Information

The family of James Thomas Hasslinger created this Life Tributes page to make it easy to share your memories.