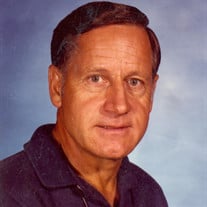 James Roger Jones passed away the morning of June 12, 2018 of a heart attack. He was born March 14, 1933 in Tacoma, Washington to Wallace B. Jones and Veronica Ruth(La Plante) Jones. Jim attended Clover Park High School. He enlisted in the Marine Corps in January of 1951. As soon as he turned 18, he was sent over to South Korea for 1 year, where he was engaged in active duty. He was sent back to Pendleton Marine Corps Base where he was stationed until his discharge January of 1954. While there, he spent some of his time being a drill Sargent. While in the service, he attained his GED. He then used his GI Bill to attend and graduate from CWC with a degree in education. He began his 30 year teaching career. One year at Marcus Whitman Jr High in Port Orchard, and 29 years at George Dewey Jr High, and East Bremerton High School in Bremerton. While in Port Orchard, He became reacquainted with and married Lois E Pierce. Lois was teaching at West Park Elementary at the time. They were married June 13, 1959, one day short of 59 years. Besides teaching PE, Health, and other subjects he was also an assistant coach in football, Baseball, and gymnastics. He and Lois had two children, Laurie Ann, born in 1960 and Marc Wallace born in 1964. Jim’s hobbies were fishing, golf, playing slow pitch baseball in his younger years, and playing bocce ball with his East High Buddies. Skiing was a fun family time. Summers were spent traveling in the Chinook Camper, often towing a boat or car behind with children/grandchildren inside. Boat camping trips up and down Lake Chelan were so special. In the 70’s we bought a 2 week time share around the Christmas season with friends Larry and Beth Sampson. By the time we had retired, those 2 weeks had grown to 6 weeks we finally sold out about 4 years ago. Around 1997, we became snow birds in surprise AZ. Lois will continue to go down for 2 or 3 more years. We did some overseas traveling until it got to be too difficult for Jim. Jim was preceded in death by his parents, Daughter Laurie (Roni) brother Wally, sisters Barbara, and Maxine. He is survived by wife Lois E Jones, Son Marc W Jones grandchildren Christopher McGlothlin, Brooke Wardle, Garrett Jones, Brandon Jones, Maddison Jones, and Sister Shirley Patnode, and special friends Larry Sampson, brother in law Allen Patnode, Wilbur Brown of Kihei, Maui HI, Paul Southwell, and his East Bremerton Coaching buddies. Jim lived a happy active life. His heart just gave out. He had excellent doctors both here and in Arizona, but there was just so much that they could do. Rest in Peace, dearest Jim. You have probably had some family reunions, and long talks with Laurie. You, and Wally might be playing golf again. Casual dress please, like you were going to the golf course, or had just returned. In Lieu of flowers, we suggest donations to American Heart Association, Juvenile Diabetes Association, or charity of your choice in memory of Jim. His Service will be June 29th at 2:00 pm at Central Kitsap Church on 9300 Nels Nelson Road NW, Bremerton, WA.

James Roger Jones passed away the morning of June 12, 2018 of a heart attack. He was born March 14, 1933 in Tacoma, Washington to Wallace B. Jones and Veronica Ruth(La Plante) Jones. Jim attended Clover Park High School. He enlisted in the... View Obituary & Service Information

The family of James Roger Jones created this Life Tributes page to make it easy to share your memories.