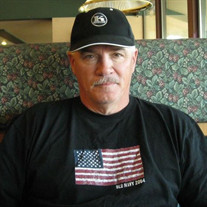 James “Jim” Allan O’Hair was born on February 6th, 1949 to Curtis and Violet (Kelley) O’Hair in St. Cloud, MN. He spent his first 12 years living and working on a farm with his family and then relocated to Bremerton, WA. Jim attended high school at East High School, Bremerton WA. Jim joined the US Navy in March of 1969. He served aboard the USS Midway and in Vietnam. He received many medals and awards in his military service including a “Vietnam Service Medal”, a “National Defense Service Medal” and “Armed Forces Expeditionary Medal”. Jim received an honorable discharge from the US Navy in May of 1973 and was proud that he was discharged on a Friday and started work as a crane mechanic for Puget Sound Naval Shipyard the following Monday. In 1990 Jim accepted a position at Trident Subbase Bangor. He retired in 2005 as a Crane Inspector Supervisor. He served his country both through the military and civil service for 38 years. He was very proud of his service. Jim’s first love was his beautiful wife Kathy of 35 years. His love didn’t stop there; he also had a deep love for his family, friends and animals. He enjoyed his family immensely. He loved all family gatherings, with Christmas Eve always being a favorite. He always loved to share his “grandpa” jokes. We laughed not at the jokes, but at how tickled he was when he told them. He loved his friends; each of them meant the world to him. He was a good friend to so many. He had an extreme love for animals, not just his fur babies, but all animals. He loved to work with animals and teach them tricks. His heart was bigger than this world. He loved people, all people. He made friends everywhere he went. He loved to go to restaurants and choose a family, elderly couple or service member to bless with paying for their meal. He blessed people everywhere he went. He felt deeply for the homeless. He enjoyed stopping and helping those in need. He always said his giving ways were because of his Mom and Dad. Jim could do anything he set his mind to. He had the patience of a saint. He remodeled his family home from top to bottom. Everything he touched turned into beauty. He restored many vehicles in his life, as working on cars and restoring cars was his passion. He took pride in getting things done the right way. If you stopped by his home you would most likely find him working in one of his many garages. If you stopped by you were prepared to help move an engine or hold a wrench. His reasoning for asking for help was purely because he wanted to visit with you. He loved to spend time with his loved ones and friends. He loved to debate politics with anyone that would listen. He always respected your position, or tried to, but continued to try to get you to see it his way. He loved his game shows and the history channel was one of his favorites. Hostess cherry pies were a must for a late night snack. He loved his Seahawks and enjoyed going to games with his daughter and grandsons. Jim was a Lutheran from birth. He referred of himself as a child of God and was proud of that. He carried a bible to work every day in his lunch pail. He professed faith in Christ and tried to lead a life of example. He was a true believer. Jim was preceded in death by his loving parents Curtis Floyd O’Hair and Violet Mae (Kelley) O’Hair. Jim is survived by his wife Kathy. His children Donnie (Karen) Bunce, Michelle (Robert) Husted, James (Tonja) O’Hair Jr, Jonathon O’Hair and Hilary O’Hair. His siblings Judy (Gary) Spychala, JoAnn (Chris) Fryling, Curt (Sharon) O’Hair, Mary (Shannon) Crane and Scott O’Hair. His grandchildren Nicholas (Audrey) Husted, Christopher Husted, Vincent O’Hair, Jacob O’Hair and Colby Wimberly. His only great grandson Liam James Husted and his many nieces and nephews. His fur family Holly, Tucker and Stella Mae. We would love to see you at Jim’s “Celebration of Life” on Sunday April 8, 2017 at 4:00PM at Rill Chapel, 1151 Mitchell Ave, Port Orchard WA 98366.

The family of James Allan O'Hair created this Life Tributes page to make it easy to share your memories.