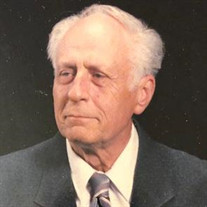 James was born November 2, 1924 in Redfield, South Dakota to Maurice and Elizabeth (Schmidt) (Ringrose) Bader. He grew up in Tacoma, WA, where he graduated from Bellarmine High School, and later attended Seattle University where he studied electronics. James was a smart and honest man with no guile, who was beloved of and respected by his family and friends. James was a veteran of the U.S. Army, having served dutifully during World War II from 1942 to 1945 as a paratrooper in the 11th Airborne 187th Regiment. His duty stations included Burma (Myanmar), New Guinea, Philippines, and Japan. As an adult, James resided in Port Orchard. He married Audrey-Jane Luke November 22, 1981. He worked as a civil servant at Puget Sound Naval Shipyard (Shop 67) in Bremerton, where he was an electronics technician and planner, retiring in 1984. James was very athletic and excelled at baseball, golf, bowling, and enjoyed tossing horseshoes. James was a member of the following: Fraternal Order of Eagles (FOE) Aerie#3, 60 years, American Legion, NRA, and NARF. James was preceded in death by his father and mother. He is survived by his wife, Audrey, step-children Steven Markwith, Julie Markwith, Heidi (Markwith) Townsend, and Lauri (Markwith) Vautour, step-nieces Audrey-Rose and Nicole Vautour; his brother and sister-in-law Phillip (Phil) and Carol Ringrose, his nieces/nephews Staci (Ringrose) Johnson, Patrick Ringrose, James (Jimmy) Ringrose, Margaret (Maggi) (Ringrose) Ostrander, Phillip Ringrose, and many step-grandchildren, and great nieces/nephews. A celebration of James’ life will be held at the Calvary Cemetery in Tacoma. Contact family for more information. In lieu of flowers, donations can be made to VFW Post 10018 Narrows Bridge, 4741 N. Baltimore St, Tacoma, WA 98407.

James was born November 2, 1924 in Redfield, South Dakota to Maurice and Elizabeth (Schmidt) (Ringrose) Bader. He grew up in Tacoma, WA, where he graduated from Bellarmine High School, and later attended Seattle University where he studied electronics.... View Obituary & Service Information

The family of James Maurice Ringrose created this Life Tributes page to make it easy to share your memories.