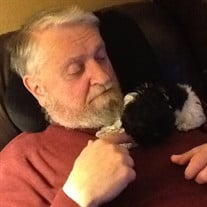 James Shepard, 75 of Port Orchard, went to be with his Lord and Saviour on June 6, 2018. Jim was born on 22 April 1943 in Norfolk, Virginia to Harry Shepard and Thulla Thomas. He married Lynn Hershelman on 16 January 1982 after meeting in the Navy at Hospital Corpsman School in Great Lakes, IL. They travelled with the Navy to Bethesda, MD (where they got married), Barbers Point, HI; Pensacola, FL; back to Bethesda, MD; and then finally to Bremerton, WA as their last duty station. Jim got out of the Navy in 1987 while we were in Pensacola and followed Lynn where the Navy sent her. After getting out of the Navy, Jim did a lot of different jobs. While in Bethesda, he went through Culinary Arts School and worked for Congressional Country Club – enjoying cooking both on the job and at home. Lynn always enjoyed his cooking at home, which he did for their entire life together till just recently. He was such a natural in the Kitchen – his Mom taught him a lot and he picked it up very quickly. During our time in Bethesda, his oldest son (by his first marriage) came to live with us and then moved with us to Bremerton when the Navy called. Jeff was a joy to get to know and watch grow into a wonderful young man! When we arrived in Bremerton, Jim used one of his many other talents - a jeweler for “Memorable Gems” in Port Orchard for several years. His stepfather had taught him how to work with gold, silver and precious stones. Lynn retired from the Navy and they decided to stay here in Port Orchard. They started a small business working with wood (scrolled art) and continued doing scrolled art for 13 years. He enjoyed cutting, painting, doing the craft shows and talking with customers about the different pictures they cut. He also found enjoyment in painting the wood pictures and then found he also enjoyed painting on canvas. Just a year and a half ago, he found out he had lung cancer and had one lobe of his right lung removed and we thought that he had conquered it, but it came back. He had four chemo treatments and then on June 5th we went to bed as normal and God called him home in his sleep early on the 6th. I am so thankful that we were together for the last seconds of his life here on earth. He is preceded in death by his parents, his oldest son and several half-sisters and brothers. Lynn will carry on at PSNS, their scrolled art work and take care for their two beloved dogs – Brutus and Jake.

James Shepard, 75 of Port Orchard, went to be with his Lord and Saviour on June 6, 2018. Jim was born on 22 April 1943 in Norfolk, Virginia to Harry Shepard and Thulla Thomas. He married Lynn Hershelman on 16 January 1982 after meeting in... View Obituary & Service Information

The family of James Lee Shepard created this Life Tributes page to make it easy to share your memories.

James Shepard, 75 of Port Orchard, went to be with his Lord and...