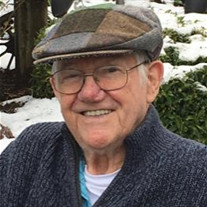 James F. Smith, 90, passed away January 10, 2020 in Melbourne, Florida. He was born January 3, 1930 in Saint Catharines Ontario, Canada to James P. Smith and Mary (Huke) Smith Donnelly. Shortly after his birth his mother moved back with family where he was raised in Brooklyn, New York. His childhood home in Brooklyn was situated above a butcher shop on Flatbush Avenue, filled with the love of his Parents, Grandparents, and many Aunts and Uncles who immigrated from Ireland and Scotland. He often told stories of his beloved Aunt Nell and Grandmother Mary and the Irish jigs she would have him dance with her. When he was 17, he moved to Miami, Florida where he made furniture until joining the Army in 1952 as a paratrooper for two years. After the Army In 1960 Jim joined the United States Navy in which he served for 20 years, stationed in several places and serving aboard the aircraft carrier the USS Forrestal. While stationed in San Francisco, California in the late 60’s he met the love of his life of 40 years Diane M. (Dunlap) Smith. They were married in Corpus Christi, Texas in 1968 and she preceded him in death in 2008. One of his greatest achievements was making Chief and he took great pride throughout his Naval career before retiring in 1979. Moving that same year to Silverdale, Washington he then went to work for both NOAA and later Naval Submarine Base Bangor retiring from civil service work in 1992. Jim had a great sense of humor and loved to tease, he enjoyed to barbeque with family and friends, hunt, wood work, listen to music, cheering The Fighting Irish Notre Dame Football team and most of all golf. When asked what his favorite place was, he said “any golf course”. He was most proud of his three daughters who he is survived by, Ellen (Terry) Smith of Pembroke Pines, FL, Beth Harris of Melbourne, FL and Cathy (Bart) Warrington of Port Orchard, WA., who love and will miss him “MORE” than words can ever say. “Death leaves a heartache no one can heal; Love leaves a memory no one can steal.” Funeral will be held January 22, 2020 beginning with a Rosary at 10:30 followed by a Funeral Mass at 11:00 held at Star of the Sea Catholic Church, 500 Veneta Avenue, Bremerton, WA 98337 followed by a reception

The family of James Francis Smith created this Life Tributes page to make it easy to share your memories.