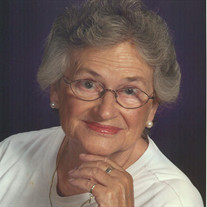 Jane Louise Berggren died peacefully on December 5, 2017 in Bellevue, Washington. She was born to Adolph and Alice Eberharter in Seattle, WA on March 3, 1930. Jane married her husband Ralph on August 22, 1958 in Seattle, WA. He preceded her in death on December 27, 2000. Jane is survived by her children and spouses; Fritz (Sandi) Berggren, Eric (Kate) Berggren, Ralph (Judy) Berggren, Alice (Scott) Strong; 7 grandchildren and a brother Richard Eberharter, Seattle, WA. In addition to her husband, she was preceded in death by her brother Jim Eberharter. Jane was one of the last students enrolled at the old Central Grade School where I-5 today runs through Seattle. She attended Lincoln High School, and graduated from the University of Washington in 1951, where she was a member of the Sigma Kappa sorority. Jane worked for the Washington Military District in Seattle, WA in 1951. She continued her service for the the US Government from 1951 to 1955 with the Department of State in Washington DC where she served in communications in Embassies in Bagdhad and Paris. After her government service, Jane returned home to get married and raise a family. Jane and her husband Ralph raised their children near Seabeck, WA on Hood Canal, where her children embraced life on the water and in the woods in the days when a bicycle was the most prized possession and iPhones did not exist. She welcomed her mother, Alice, into her home and her children grew close to her over the years. Jane was active in Women’s Aglow, and when her husband retired Jane signed up for more overseas adventures with a missionary group. All of Jane’s children treasured returning to her home for holidays and vacations even though life took them in different directions. Her final years were in Belfair, Seattle, and Bellevue. Jane died at peace with her friends, her family, and her God, our Lord and Savior Jesus Christ. In lieu of flowers memorial donations may be made to Youth With a Mission or Wounded Warriors.

Jane Louise Berggren died peacefully on December 5, 2017 in Bellevue, Washington. She was born to Adolph and Alice Eberharter in Seattle, WA on March 3, 1930. Jane married her husband Ralph on August 22, 1958 in Seattle, WA. He preceded her... View Obituary & Service Information

The family of Jane L. Berggren created this Life Tributes page to make it easy to share your memories.