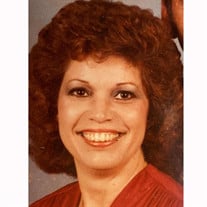 Janet Loraine Lind (Monzani), age 79, of Port Orchard, WA, passed away on July 19, 2020, with her loving husband by her side; at home as she wished, after fighting a 15 month battle with cancer. During her illness, her husband did everything humanly possible to provide for her care, maintain her dignity, and most of all, show her his love. Janet is survived by her husband Jerry; her children (and their spouses, all of whom she loved as her own) Joe (Kelly), Andy (Wendy), Jackie (Casey) and John (Christie); her grandchildren and great-grandchildren, as well as her sister Louise, and numerous nieces and nephews and other extended family. Janet was preceded in death by her parents and her son Jerry. Janet was born May 11, 1941, in San Francisco, CA, to Samuel Monzani and Mabel Monzani (Cole). When Janet married Jerry Lind, she began the happiest part of her life. Janet and Jerry settled in Port Orchard; together creating a home for themselves and their family. During the many years that defined her life there, Janet met Linda; with whom she sustained an active and life-long bond of friendship. Janet loved taking care of her family and home. One of her greatest joys was nurturing her grandchildren. Her children and grandchildren were the light of her life; and the biggest regret she had was knowing that cancer would soon take all of this away from her. She was the strongest - and most determined - person any of us will ever know. Janet was also a sports enthusiast. She believed in cheering on her Seattle Seahawks and the Washington Wizards. Even when the home teams weren’t able to deliver she always supported her Washington Teams. Janet's favorite saying was 'Get a grip!'; and will forever be fondly thought of as her special pearl of wisdom. But, most of all, she loved her family; each of her children knew they were her favorite. While losing her is devastating to each and every one of us who love her, it can also give us comfort knowing that she is now and forever at peace.

Janet Loraine Lind (Monzani), age 79, of Port Orchard, WA, passed away on July 19, 2020, with her loving husband by her side; at home as she wished, after fighting a 15 month battle with cancer. During her illness, her husband did everything... View Obituary & Service Information

The family of Janet Loraine Lind created this Life Tributes page to make it easy to share your memories.