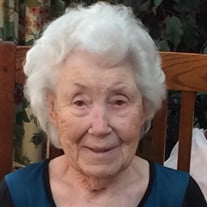 Jeanne Evelyn Lippincott (nee Flynn) was born in Minneapolis, Minnesota on September 21,1923. She met and fell in love with a handsome young sailor, Don Lippincott, who was studying in Minneapolis. At the end of WWII, they were married in California on May 6, 1945. For the next 60 years they lived mostly in California and started a family in Whittier. Their three children Pat, Connie and Donnie were delightful kids always bringing much joy to their parents. Jeanne was a homemaker who enjoyed painting, crafts, bridge and finding good deals while shopping. While her children were young she was active as a Brownie troop leader, involved in the school PTA, and helping in a Catholic women’s group. After Don retired, they spent many happy days in their motorhome enjoying the California beaches. Jeanne was the grandmother to seven children, Julie Gaffney, Jennifer Kleyn, Irene Coleman, Michelle Reich, Stephanie Lippincott, Andrea Berumen, and Donal Lippincott. She also has fifteen great grandchildren: Alyssa Hawkins, Finn Hawkins, Lucas Kleyn, Anna Kleyn, Jeremiah Coleman, Gabrielle Coleman, Nova Reich, Ethyn Crane, Alexxa Berumen. Annabelle Berumen, Adelyne Berumen, Abigail Berumen, Rosaleen Lippincott, Alannah Lippincott, and baby Donnie Lippincott. Jeanne and Don moved from California to Gig Harbor, Washington in 2005. After Don passed away Jeanne resided at the Gig Harbor Merrill Gardens for eight years. She shared her apartment with her beloved Boston terrier, Bonnie. During her final four years, Jeanne resided at Stafford at Ridgemont Skilled Nursing Facility until her death August 2, 2018. The staff enjoyed her feisty behavior and her sense of humor will be missed by all. Jeanne was preceded in death by her husband Don, her siblings Pat Moore, Alice Hessel, Eleanor Johnson and John Flynn. A funeral mass will be held on August 10th at 11 am at Saint Gabriel’s Church and a Memorial celebration at Rill Funeral Home on August 11th at 4 pm.

Jeanne Evelyn Lippincott (nee Flynn) was born in Minneapolis, Minnesota on September 21,1923. She met and fell in love with a handsome young sailor, Don Lippincott, who was studying in Minneapolis. At the end of WWII, they were married in California... View Obituary & Service Information

The family of Jeanne Lippincott created this Life Tributes page to make it easy to share your memories.