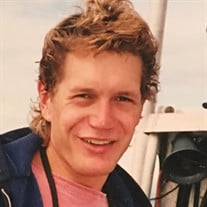 Surrounded by family and friends, Jeff lost his battle with Sepsis Pneumonia on Wednesday, November 1st, 2017 in Bremerton, Washington. He was born in Encino, California on February 27th, 1962 and shortly after moved with his Dad, Mom and brother Todd to Tacoma, Washington for a short period before moving to Poulsbo, Washington where he attended David Wolfle Elementary and North Kitsap High School. He also enjoyed being a Cub Scout and playing Pee Wee football and baseball during his school days. His lifelong interests were many and varied but his true love was the water. He was a skilled successful seafood harvester and commercial diver in the Washington and Alaskan waters for 30 years. He also loved fishing the freshwater lakes and streams of Western Washington. When Jeff was a young lad he was introduced to the sport by his Great Uncle Tom and continued enjoying the sport throughout his life. He also loved music. This included playing his guitar (he often said it gave him peace) and listening to Rock and Jazz music. Spicy Mexican Food was also a favorite. Jeff was also a skilled mechanic and electrician whether working on any part of a dive/fishing boat or working on the myriad of cars he owned over his life. He loved fast cars (they all had top flight stereos installed in them) and enjoyed working on them as much as he enjoyed driving them. Figuring out how to solve a complex problem on anything mechanical or electrical was a source of enjoyment and accomplishment to him. He also held a certificate in Heating, Ventilation and Air Conditioning Repair. Jeff had a great respect for “older” people and enjoyed talking to and learning about life from them. One of his favorite people was his Great Aunt Trudy. Above all he was a kind, witty, charming, gentle soul who touched many, many people in his lifetime. His smile has melted many hearts. Everybody loved Jeff. He will be greatly missed by all who knew him over his life journey. Jeff is survived by his parents, Lou and Judy Dufresne of Port Orchard and Don and Tachis Jolibois of Poulsbo; Sister, Noelle and Brother in Law Shea McPherson of Tacoma; Brother, Chris Jolibois of Mazatlan, Mexico; Aunt and Uncle Toni Clark and Richard Bell of Alexandria, Virginia; Great Aunt Trudy Pelesky of Tacoma: Nieces, Talia (Vandegrift) Yates of Phoenix, Arizona, Regan (Bradwell) Horton of Tacoma, Morgan Bradwell of Tacoma, River Thaden of Tacoma, Celine Jolibois of Tacoma, and Judy Jolibois of Mazatlan, Mexico; Grand Niece Princeton Horton; Nephew, Alex Jolibois of Phoenix, Arizona; Stepdaughter, Megan Flath of Bremerton and numerous Aunts, Uncles and cousins. He is preceded in death by his brother Todd Clark Jolibois; Maternal Grandparents, Clarence and Elma Clark and Paternal Grandparents, Albert and Marianne Jolibois. Services will be held at 1:PM, Saturday, November 18th, 2017 at Rill Chapel, 1151 Mitchell Avenue, Port Orchard, Washington with a reception to follow at the Parkwood Community Club, 3045 Madrona Dr SE, in Port Orchard. Private Inurnment will be at Fraola Cemetery.

Surrounded by family and friends, Jeff lost his battle with Sepsis Pneumonia on Wednesday, November 1st, 2017 in Bremerton, Washington. He was born in Encino, California on February 27th, 1962 and shortly after moved with his Dad, Mom and brother... View Obituary & Service Information

The family of Jeffrey Jolibois created this Life Tributes page to make it easy to share your memories.

Surrounded by family and friends, Jeff lost his battle with Sepsis...