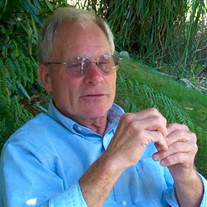 Jerrell Wayne Lewellen (May 29, 1935-April 30, 2018) was the only man who could, all in the same day, milk his cow, make his own latte, strike an arc for the last weld on a skyscraper, recite Shakespeare over lunch, play a prank on a fellow ironworker, haul scrap metal home in his dump truck, lay bricks for another home building project for his family, milk his cow again, peel apples for another pie, tell stories to his grandkids, read his Bible, sleep like a baby, and rise next morning and do it again—grinning like a kid all the while. Born in LaSalle, Colorado May 29, 1935, Jerrell Wayne Lewellen died April 30, 2018. He is survived by his beloved wife of fifty-nine years Patricia, their four children; Teri Lewellen, Jeff Lewellen, Cheryl Bond, and Doyle Lewellen; seventeen grandchildren and seven great grandchildren. Jerrell was preceded in death by his father Ollie Otis, his mother Etha Emma, his two brothers; Cary and Garry; and his infant grandson Joey. Jerrell was a lover of both work and play, and it was hard to tell where one ended and the other began. Jerrell was a man of steel, a block of iron ore with arms and legs—and hands, hands with callouses. Jerrell was certified to weld every ore on the planet, a man of cultural dominion who took raw materials and shaped them into useful forms, a man who tamed steel, made it do what he needed it to do to get the job at hand accomplished. Jerrell was a storyteller and had stories to tell. Hear the stories of his youth, and the wonder is that Jerrell lived long enough to get Alzheimer’s. Stories of his childhood on the ranch, in the mountains, hunting, shooting, blowing things up, stories about pranks with wildcats, thugs, carburetors, gunpowder and cannons, boating adventures, his stories an endless source of entertainment for his grandkids. First and last, Jerrell was a Christian, who rests in the merits and righteousness of his Savior Jesus Christ, awaiting the glorious resurrection and life eternal.

Jerrell Wayne Lewellen (May 29, 1935-April 30, 2018) was the only man who could, all in the same day, milk his cow, make his own latte, strike an arc for the last weld on a skyscraper, recite Shakespeare over lunch, play a prank on a fellow... View Obituary & Service Information

The family of Jerrell Wayne Lewellen created this Life Tributes page to make it easy to share your memories.