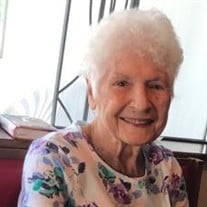 Jill Beebe Ondracek, born August 4th, 1931, to Harry and Lucile Beebe in Los Angeles California passed peacefully at home surrounded by her family, November 23rd, 2021, after a long battle with Alzheimer's disease. She was ninety years old. Jill was raised in California and Nebraska with her two siblings. An inquisitive child who loved to learn and play with numbers from a young age, she was rather adventurous. In 1948 she graduated early from Alhambra High School at the age of 16. It was in Alhambra California that she met and married her first husband, Harold Bracy, with whom she had and raised her three children. Jill loved being a mother, spending much of her time with her family on the Pacific Ocean, sailing and swimming. In the 1970’s she earned her private pilot’s license and would fly all over the states participating in “Fly-ins”. In the late 1970s she moved to Washington State and became a bookkeeper for the Kitsap school district where she met and later married her 2nd husband, Raymond J Ondracek. She was an active member of the Adventure of Faith Presbyterian Church in Port Orchard Washington since the 1980’s. This was where she loved to fellowship with other believers, minister to her community, sing in the choir and participate in bible studies. Jill loved to be with people. She rarely met a stranger, and if she did, you were not a stranger for long. She had a smile and compassion for everyone she met, up until the very end of her life. She cherished the opportunity to know people and invest in their lives. To know her, was to see the love of Christ. In addition to her parents, she was preceded in death by her parents in-love Alex Font Bracy and Virgie Hazel Allen Bracy whom she had a wonderful relationship with up until their passing; her sister Phyllis Corban, of Oregon, and her brother John “Jack” Beebe, of Florida. She is survived by her loving husband Raymond J Ondracek of Port Orchard Washington; Her daughter Debra Lee Darr and her husband, Russell, of Texas; Her sons Richard Alex Bracy, of Louisiana and Dr. John “Jack” Bracy and his wife, Jean, of California; As well as her bonus sons Jack Ondracek, Jay Ondracek, Ira Ondracek and Paul Wright of Washington state. She leaves behind a legacy of love for family and her God to her children, her twenty grandchildren, ten great- grandchildren and many friends. “His lord said unto him, Well, done, thou good and faithful servant: thou hast been faithful over a few things, I will make thee ruler over many things: enter thou into the joy of thy lord.” ~ Matthew 25:21