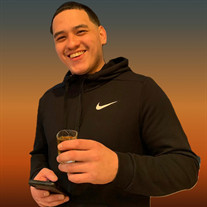 Jimmy Ray Leal was born in Denver, Colorado on February 5, 1995 where he spent half his childhood before moving to Port Orchard Wa with his mother and 4 brothers. He graduated from South Kitsap High School. . He was quite an athlete, competing in baseball, football, and wrestling.. Jimmy was also a : Kani Ka pahu 'O' Lohiau from 2005 to 2011. Jimmys faith in God and the Catholic Church was strong. He was baptized, received holy communion and Confirmation . Along with his brothers he attended religious mission trips in the Northwest helping at food banks and women shelters. Jimmy’s main mission in life was to take care of his family. He worked as a FedEx driver and operations manager, and even completed training to be a certified driver trainer for the state of Washington. At his first year at FedEx, he was awarded “Driver of the Year”. Jimmy was always there for everyone. He would give the shirt off his back to anyone in need. Jimmy could be found wherever the party was (or wherever the Broncos or Disney movies were playing). He was known as the King of the Table at Long Lake as well as Call of Duty Warzone’s best ‘sniper on the map’. He could often be found spending his time holding and spoiling babies, camping at Lake Cushman, playing pool and darts with friends, and enjoying reggae and oldies tunes. Jimmy was preceded in death by Raymond Leal, Marie Leal, Dolores Salindron, Martina Cordova, and Rose Hegg. He is survived by his parents; Martina & Jonathan Calfy, Grandparents; Mike and Martha Torres, siblings; Johnny, Travis, Angelo, Elijah, Summer, Aaliyah, Mario, Ray, Uncles John, Michael, and Matthew, and nieces and nephews; Leila, Kayden, Ava, Khloe, Josiah, Uncle Joe, & many aunts, uncles and cousins. In lieu of flowers, donations can be made to the family. “I love you more” - Jimmy

Jimmy Ray Leal was born in Denver, Colorado on February 5, 1995 where he spent half his childhood before moving to Port Orchard Wa with his mother and 4 brothers. He graduated from South Kitsap High School. . He was quite an athlete, competing... View Obituary & Service Information

The family of Jimmy Ray Leal created this Life Tributes page to make it easy to share your memories.